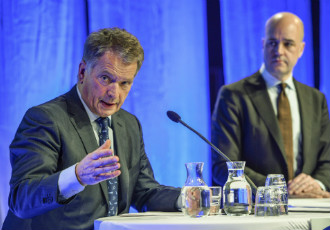 THE HEADS of state of both Finland and Sweden have dismissed speculation on the countries' Nato membership as premature. In an ongoing security and defence policy seminar in Sweden's Sälen, Swedish Prime Minister Fredrik Reinfeldt and Finnish President Sauli Niinistö reiterated that Nato membership is not currently on the agenda of either country.

“We're not planning on applying for Nato membership, although the membership continues to be an option,” Niinistö stated.

Instead, both heads of state expressed their support for strengthening the defence co-operation between Sweden and Finland. In addition, they emphasised the significance of developing the countries' partnership with Nato.

Sweden, Reinfeldt said, is reluctant to apply for Nato membership due to, for example, a lack of parliamentary support. Reinfeldt's own party, the Moderate Party, is an advocate of Nato membership.

The Swedish defence policy will be re-defined this spring, after the completion of a review on the country's defence policy in late March. Meanwhile, an assessment of Sweden's defence co-operation and its development with other Nordic countries, the European Union and the Nato is also under-way.

In Sweden, the debate over Nato membership has intensified in recent months due to a perceived deterioration of the capacity of the country's armed forces. The Swedish National Audit Office concluded recently that the armed forces are currently, and will in the near future continue to be, unable to carry out their responsibilities.

The poll is conducted annually by the Swedish Civil Contingencies Agency (MSB).