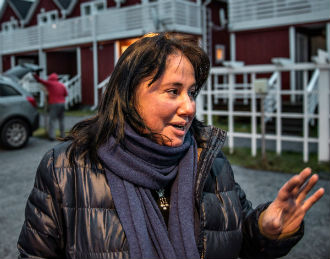 The majority of MPs would restrict property purchase by the Russians

Over half of Members of Parliament would restrict the Russians’ opportunities for buying real estates from Finland. 101 MPs have signed a bill on the subject submitted close to Christmas.

Åland’s law, which necessitates a five year residence in the county before land purchase are permitted, has been suggested as a model for the new bill.

A restriction affecting only the Russians cannot be implemented for the sake of equality. Instead, the bill would limit house sales for all those coming from outside the European Economic Area (EEA). They should live in Finland for five years before they would be given a permit for real estate business.

MP Suna Kymäläinen (SDP) who has been preparing the bill and collected signatures for it has attempted to produce a similar bill once before. In her home municipality Ruokolahti of Southern Karelia a third of all real estate sales have been made by the Russians.

Kymäläinen considers it a grievance that detached houses become mostly summer cabins of the Russians. The owners do not pay municipal taxes to Finland, but only property tax.

“It does not cover maintenance costs, and the pressure on raising the taxes of permanent residents increases,” Kymäläinen says.

The bill also calls for reciprocity in real estate deals. Finns and other foreigners cannot buy property on the Russian frontier, which attracts Finns the most, due to the definition of Russia’s frontier that came into effect in 2011. In 2012 Russians did about 430 real estate deals in Finland.

The St. Petersburg born entrepreneur Naylya Daminova does not believe that sales limits would hold any significance to Russians spending their holidays in Finland.

According to Daminova limiting real estate sales aimed at business operations could, instead, complicate Russian investments in Finland. For example travel real estates have been transferred to Russian ownership by dozens in the 2000s especially in Southeast and Eastern Finland.

It is customary for the Parliament to take up bills that have been signed by half of the Members of Parliament.

“In this case it is possible that the legal committee will begin to process the matter,” evaluates Professor of Law Pekka Viljanen from the University of Turku. Legally regulation on land ownership aimed at a single nationality is not possible. The starting point is that the bill must be inspected from the perspective of equality.”

Viljanen reminds that even a large majority of MPs standing behind the bill is not a guarantee for it to pass. He suspects that an extensive legal system for preventing real estate sales for outsiders could be created.

Even if the bill were passed it would not prevent real estate deals by outsiders of the EEA region operating on behalf of a limited liability company based and registered in Finland. Even now a part of the Russians’ real estate deals are made in the name of Finnish companies.

Also companies and their shares can switch owners regardless of the purchaser’s nationality as before. The law would not significantly affect corporate real estate or housing company stock sales.