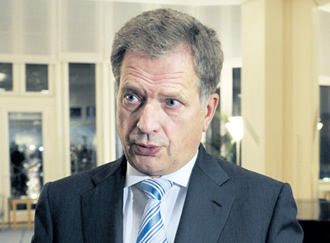 The public debate on wage cuts broadens after President tables a writ to slash his own salary.

ON TUESDAY, Minister of Labour Lauri Ihalainen (SDP) became the most recent public figure to partake in the continuing debate on pay cuts. According to Ihalainen, a general wage cut would not promote the reflation of the Finnish economy, but rather impede consumer demand and thereby further exasperate the economic situation. Earlier, Ilpo Kokkila, the chairman of the Confederation of Finnish Industries’ (EK) board of executives, gauged that extensive wage cuts would reduce purchasing power temporarily, but also promote the competitiveness of Finnish industries.

The statements are part of an influx of comments from the political elite and business executives, kindled by a writ – presented to the Finnish Government by the President of Finland, Sauli Niinistö – to slash the presidential salary by nearly a quarter to 126,000 euro. Eero Heinäluoma (SDP), the speaker of the parliament, subsequently called for a pay cut for members of the parliament: “We live in a time of parsimony. The example set by the political elite as well as business executives is of significance,” he wrote in his blog.

A general wage cut is not, however, in the government’s plans, reassures Prime Minister Jyrki Katainen (NCP). According to the Finnish PM, Niinistö’s writ was first and foremost a gesture and an example, not dissimilar to the five per cent ministerial wage cut introduced over a year ago. “A general pay cut, applicable to all Finns, was not the goal of either proposal, nor was it to insist the measures have a bearing on the incurring of state debt,” Katainen emphasised.

The Minister for Foreign Affairs, Erkki Tuomioja (SDP), questioned the projected positive impacts of parliamentary wage cuts. “This is naïve idealism at best, and ingratiating populism at worst,” Tuomioja claimed in his blog. The sole effect of parliamentary wage cuts, he believes, would be the further disparagement of politics. The foreign minister also took a swipe at Heinäluoma by indicating that Niinistö’s initiative spawned a populist contest.