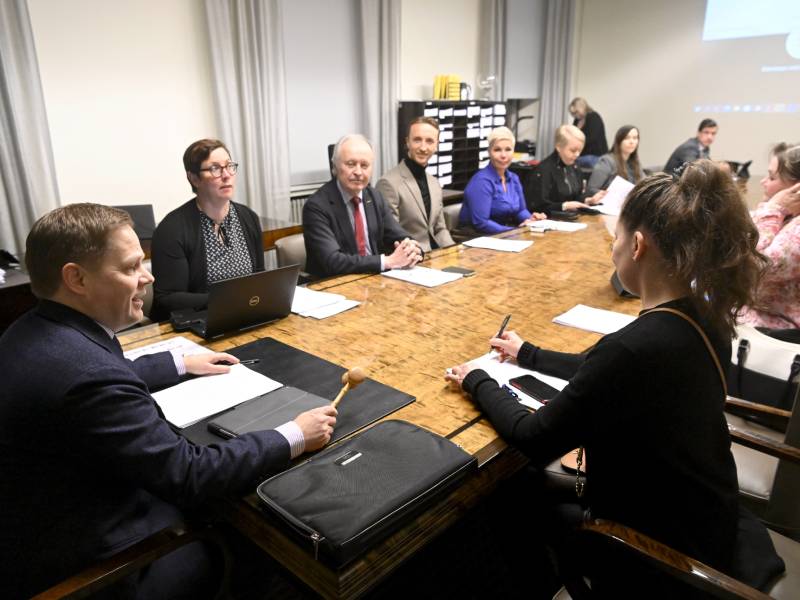 The Parliament’s Social Affairs and Health Committee re-convened to draft its report on a government bill to reform the trans act in the Parliament House on Thursday, 19 January 2023. The committee voted 11 for and 5 against in favour of the bill, after introducing some amendments to it. (Markku Ulander – Lehtikuva)

MEMBERS of the Finnish Parliament’s Social Affairs and Health Committee on Thursday approved a report on the government proposal to reform the trans act by a vote of 11 for and 5 against.

“One of the base provisions was amended and two [dissenting] opinions were attached to the report, one concerning underage transpeople and one sports,” Markus Lohi (Centre), the chairperson of the Social Affairs and Health Committee, was quoted saying to reporters in the Parliament House by Helsingin Sanomat.

The amendment, he added, prescribes that anyone changing their legal gender marker not for the first time cannot do so until at least one year has elapsed since the previous change, unless they have special grounds for the change.

All of the Centre’s three members in the committee voted against the bill: Lohi, Pekka Aittakumpu and Hanna-Leena Mattila. The other two nay votes came from Arja Juvonen and Minna Reijonen of the Finns Party.

Both sets of lawmakers also attached a dissenting opinion to the report.

Lohi stated that some of his party comrades “surely” support the basis of the bill but that he and his fellow committee members viewed that the bill does not align with the government programme, which states that the gender marker can be changed by adults who presents a reasoned account of their “permanent experience” of representing the other gender.

The base provisions were amended at the behest of the National Coalition. The opposition party insisted on both limiting the ability to change gender to once a year and taking reservists into consideration.

“In practice, if you’ve completed the military service as a man you should principally have the right to also be active in the reserve. If that necessitates changes in the conscription act, they have to be carried out going forward,” commented Mia Laiho (NCP), a deputy chairperson of the Social Affairs and Health Committee.

Noora Koponen (Greens) said the Green League was not outright opposed to the amendments but wanted to make sure that the wording of the bill does not suggest any kind of distrust toward transpeople.

“We amicably reached this kind of middle-ground decision on how this should be incorporated into the provisions,” she said in the Parliament House.

The report will next be put to a vote in the Parliament. With the Centre allowing its members to treat the vote as a conscience vote, the government will likely require support also from the opposition.

Prime Minister Sanna Marin (SDP) on Thursday expressed her puzzlement with the actions of the Centre in the Social Affairs and Health Committee, reports YLE. The government, she told, was aware that the party had some representatives who would not support the bill but that should have had no bearing on the work of the committee.

“It shouldn’t have had an impact on the committee work,” she said, adding that she had discussed the issue late last year with Annika Saarikko, the chairperson of the Centre.

“She noted that this shouldn’t affect the committee work, but that in the [session] hall individual representatives would vote against [the bill],” said Marin. “We’re talking about a government proposal that should’ve passed the committee with the backing of all ruling parties.”