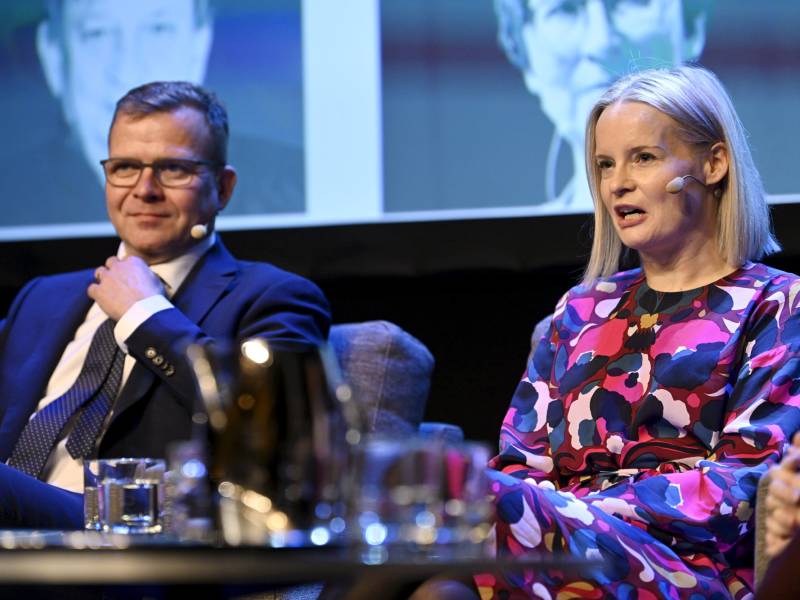 Chairpersons Petteri Orpo of the National Coalition and Riikka Purra of the Finns Party reacted at an election debate held by Maaseudun Tulevaisuus and the Central Union of Agricultural Producers and Forest Owners (MTK) in Helsinki on 11 January 2023. Both Orpo and Purra appeared to question the reliability of carbon sink calculations published late last year by Natural Resources Institute Finland (Luke). (Emmi Korhonen – Lehtikuva)

SCIENTISTS at Natural Resources Institute Finland (Luke) have expressed their surprise at comments from policy makers that question the credibility of their latest carbon sink calculations.

Petteri Orpo, the chairperson of the National Coalition, hinted last week during an election debate that the calculations may not be on a sound footing by drawing attention to what he described as “incomprehensible” variation.

“I think it’s absolutely incomprehensible that these carbon sink calculations can vary this much. And then people run to catch up with them and suddenly start drawing conclusions. That’s not how it should go,” he stated during a debate hosted by Maaseudun Tulevaisuus and the Central Union of Agricultural Producers and Forest Owners (MTK).

“We have to find a firm footing for how carbon sinks are defined and how they’re calculated so that we have a clear understanding of what’s justified.”

Luke in December unveiled calculations that confirm that the land-use sector has turned from a carbon sink to a source of emissions for the first time ever in 2021, in part due to record-high logging volumes and in part due to the slowing growth of pine forests. Both trends have undermined the ability of forests to sequester carbon dioxide from the atmosphere to the extent that the sink no longer suffices to offset emissions from other land use, such as clearing peat fields.

Orpo was not the only policy maker to question the veracity of the calculations on Wednesday, 11 January.

“The fact that we’re fixated on a carbon sink calculation from a single year is distorting this whole thing,” stated Essayah.

Raisa Mäkipää, a research professor at Luke, told Helsingin Sanomat that she is surprised and disappointment with the comments of policy makers. Luke, she reminded, has a statutory obligation to make the calculations and does so in a peer-reviewed fashion with internationally approved methods.

“The calculations are on a very sound footing,” she stressed.

“You’d hope that a party chairperson could provide more than a blunt remark if they suspect that the calculations are inaccurate,” she added. “I think this kind of a remark is an indication that policy makers haven’t had the time or willingness to familiarise themselves with what science has found out.”

If Orpo was referring to year-to-year variation in the calculations, that is attributable mostly to variation in logging intensity, added Juha Mikkola, a team leader at Luke.

“The year-to-year fluctuation, which was maybe what Orpo was referring to, stems primarily from logging, which in turn reflect demand for wood. Tree growth itself doesn’t vary too much on a year-to-year basis.”

Mäkipää also rejected the suggestion that the latest calculations are for a year that was somehow an anomaly. 2021, she told, was the culmination of more than a decade of trend-like development, with logging volumes rising and tree growth slowing down as emissions from peat fields remained unchanged.

“It’s useless to convince yourself that this is only a one-year exception,” she said.