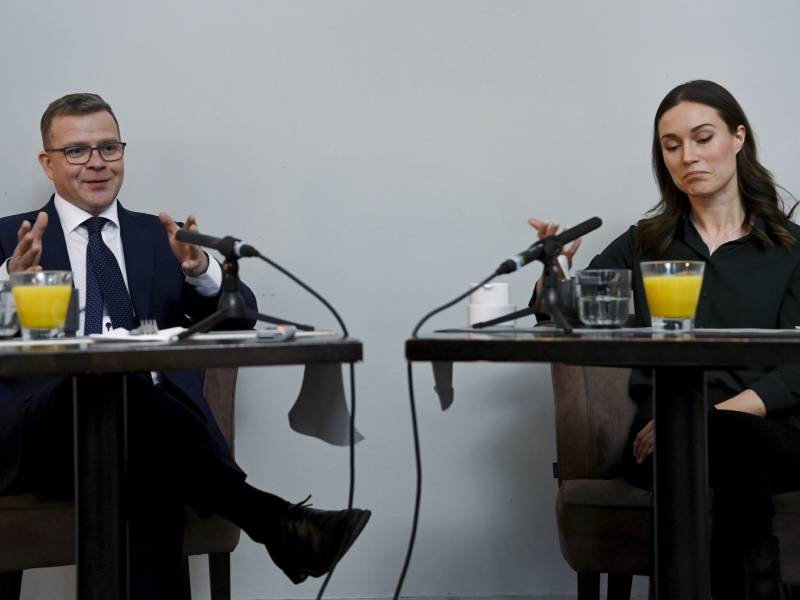 Chairpersons Petteri Orpo of the National Coalition and Sanna Marin of the Social Democrats faced off at an election debate organised by the Finnish Association of Political Journalists in Helsinki on Friday, 13 January 2023. (Emmi Korhonen – Lehtikuva)

THE FINNS PARTY is “an openly racist party” based on the statements of some of its lawmakers, according to Prime Minister Sanna Marin (SDP).

“These statements have been racist. They’ve been genuinely hostile toward certain minorities. There’s no denying this. This is a fact,” she was quoted saying at an election debate in Helsinki on Friday by Helsingin Sanomat.

The premier referred to, for example, the populist right-wing opposition party’s desire to exclude some nationalities from social security benefits, adding that she hopes that the party does not regard some population groups as more valuable than others.

She also elaborated on her earlier remark about there being no possibility of a ruling coalition that includes both the Social Democrats and Finns Party. The reason, she told, extends beyond the divide in the parties’ values and concept of humanity, to differences of view on “economic policy, labour markets, the climate and the environment”.

These views are so far apart that it is hard to fathom how the parties could find common ground on these issues, according to Marin.

“I see no value in us pretending that it’s certainly possible that we could get a government that includes the Social Democrats and Finns Party. There won’t be one. I think it’s honest to tell voters that we’re far apart from each other,” she said at the debate organised by the Finnish Association of Political Journalists.

Chairperson of the National Coalition Petteri Orpo, who has estimated that there are no insurmountable obstacles to forming a ruling coalition with the Finns Party, underscored the importance of seeing how the votes fall before making decisions about the coalition composition.

“I don’t think it’s smart to rule out a particular party in advance,” he commented at the debate.

Riikka Purra, the chairperson of the Finns Party, commented on the public debate kindled by the debate on social media.

“We have nothing to hide, be ashamed of or shady about our values. We’re a nationalist and patriotic party; we represent Finland and Finnishness,” she stated on Twitter. “I’m very proud of the Finns Party’s concept of humanity and values. Those who distort it may have regrets of their own.”

The parliamentary elections will take place on 2 April.