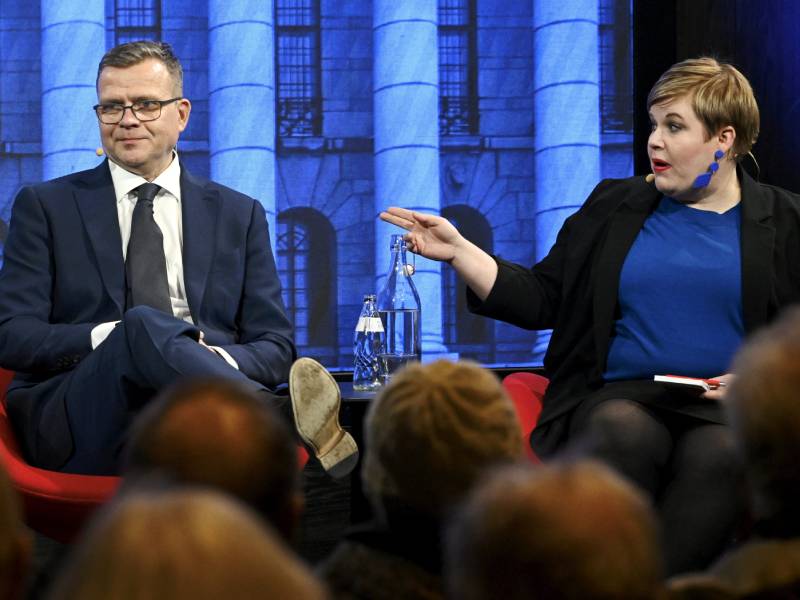 Chairpersons Petteri Orpo of the National Coalition and Annika Saarikko of the Centre reacted at an election debate organised by Ilta-Sanomat in Helsinki on Tuesday, 10 January 2023. Orpo on Wednesday questioned calculations indicating that Finnish forests are unable to sequester as much carbon dioxide from the atmosphere as previously. (Markku Ulander – Lehtikuva)

PETTERI ORPO, the chairperson of the National Coalition, has questioned the reaction of decision-makers to the widely discussed carbon sink calculations made by Natural Resources Institute Finland (Luke), reports Helsingin Sanomat.

Orpo on Wednesday said it is puzzling how the calculations are subject to so much fluctuation.

“I think it’s absolutely incomprehensible that these carbon sink calculations can vary this much. And then people run to catch up with them and suddenly start making conclusions. That’s not how it should go,” he argued during an election debate hosted by Maaseudun Tulevaisuus and the Central Union of Agricultural Producers and Forest Owners (MTK).

“We have to find a firm footing for how carbon sinks are defined and how they’re calculated so that we have a clear understanding of what’s justified,” he added.

Luke in December published calculations confirming that the land use sector turned from a carbon sink to a source of emissions in Finland in 2021, an unprecedented turnaround it attributed to the slowing growth of forests – especially pines – and intensifying logging.

Orpo estimated that there is “clearly room for improvement” in drawing attention to the reasons for the slowing growth of forests, viewing that it is necessary to see to both the well-being of forests and industrial competitiveness.

“The fact that we’re fixated on a carbon sink calculation from a single year is distorting this whole thing,” gauged Essayah.

Hanna Holopainen (Greens) and Li Andersson, the chairperson of the Left Alliance, contrastively emphasised the importance of responding to the diminishing ability of forests to sequester carbon dioxide, given the importance of carbon sinks for national climate policy.

“Natural Resources Institute’s carbon sink calculations […] were made in a scientifically sound way, and they’re something that should be taken seriously in Finland,” said Andersson.

Both the Green League and Left Alliance have called for the establishment of a system where forest owners would be compensated for their efforts to increase the carbon sink. VTT Technical Research Centre of Finland on Tuesday published an estimate suggesting that offering financial compensation for such efforts would increase the earnings of forest owners two or threefold but damage the pulp industry.

The amount of compensation was estimated based on the prices of emission rights.

“The income transfer to forest owners would be enormous,” Jyrki Raitila, the special researcher who led the project at VTT, summarised to Helsingin Sanomat.

Such a system, the newspaper wrote, would completely re-define the notion of forest ownership, as at current emission rights prices forest owners would pocket significantly more from absorbing carbon dioxide than logging. Regeneration cutting would likely occur at a later stage as owners would have an incentive to let forests grow as long as possible in order not to disrupt the steady income stream.