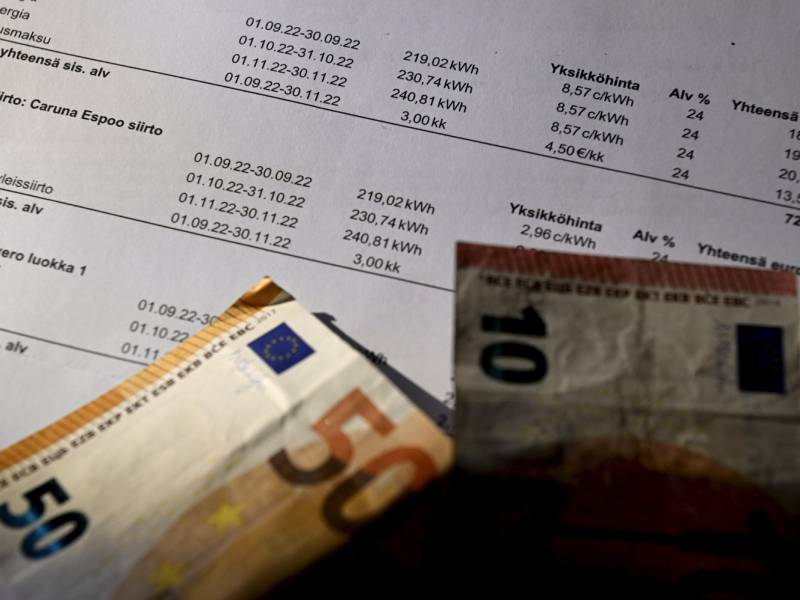 Banknotes and an electricity bill in a flat in Espoo on 29 December 2022. The Finnish government has made progress with its scheme to compensate households for high electricity costs, although some details remain unresolved. (Heikki Saukkomaa – Lehtikuva)

THE FINNISH GOVERNMENT will unveil its proposal for a scheme to compensate households for high electricity costs for comments without an agreement on all the details, report YLE and Helsingin Sanomat.

Cabinet members responsible for energy-related issues yesterday found an agreement to cover 50 per cent of monthly electricity costs exceeding 90 euros for the coldest four months of the year – November to February.

The compensation will be available to households paying over 10 cents per kilowatt hour for electricity and be capped at 700 euros a month. Its amount will be calculated based on electricity costs incurred in November and December.

The ministers also outlined that the scheme should not cost more than roughly 400 million euros.

Both YLE and Helsingin Sanomat on Monday reported that the five ruling parties wrangled over the share of electricity costs to be covered by the government, with calls for raising the share over 50 per cent arising from especially the Social Democrats and Left Alliance. The Centre and Ministry of Economic Affairs and Employment, though, insisted on not raising the share over concerns about the possibility of overcompensation.

The latest calculations indicate that compensating for 60–70 per cent of electricity costs would cost over 500 million euros, according to Helsingin Sanomat.

The daily newspaper also wrote that the negotiations protracted as the ruling parties mulled over means to help households that have renewed or are set to renew their electricity contracts during or after December. The more support is earmarked for this large group of households, the less funding will be available for the main compensation scheme.