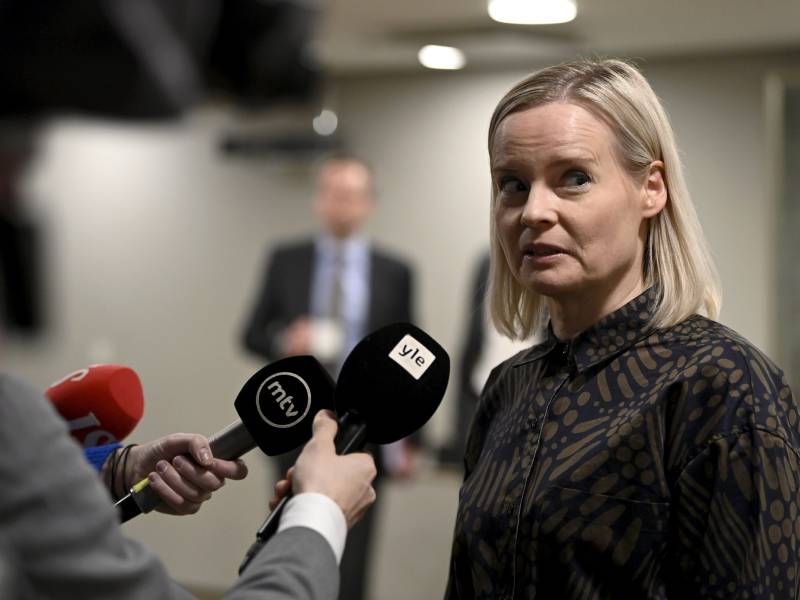 Riikka Purra, the chairperson of the Finns Party, spoke to reporters ahead of a parliamentary meeting on capping electricity prices in Helsinki on 19 December 2022. Purra on Friday told YLE that the Finns Party will naturally look to secure the prime minister’s portfolio in the parliamentary elections taking place in early April. (Antti Aimo-Koivisto – Lehtikuva)

RIIKKA PURRA, the chairperson of the Finns Party, believes the Finns Party should set its sights on becoming the largest party in the upcoming parliamentary elections in light of its rising popularity in polls.

YLE on Thursday reported that popular support for the populist right-wing opposition party has jumped by 1.9 percentage points to 19.3 per cent since early December.

“It’d be pretty crazy if the number-one spot wasn’t the party’s goal. Of course that’s the goal,” Purra stated to YLE on Friday. “The government is where legislative changes are made, where you take care of this party. An opposition party doesn’t have that opportunity.”

Purra indicated that the party leadership shares the concern of experts about converting support in polls to actual votes on election day – particularly because the party secured fell three to four points short of its poll ratings with its vote share of 11 per cent in the county elections held in January 2022.

“It feels like citizens want change, and hopefully they understand that the only way to create change is to vote in the elections,” she said.

The National Coalition, though, is confident it can hold on to its number-one spot until the parliamentary elections organised on 2 April, according to the party secretary of the right-wing opposition party, Kristiina Kokko.

“The election spring is underway and parties’ approval ratings are shifting. We’re delighted to be in this position and to be holding the top position,” she commented to YLE. “We’ll invest everything in the elections, naturally. It’s a really important step forward. We’ll see what kind of a group of parties will start forming the next government after elections.”

“It’s too early to speculate on the government’s composition.”

Antton Rönnholm, the party secretary of the Social Democrats, estimated that the ability to mobilise supporters will be key also for the electoral performance of the ruling party.

“It’s obviously unusual that the prime minister’s party has seen its popularity increase during the electoral term. We can be pleased about it, but we’ll run a tough campaign in the spring to make sure we’ll come out on top on election night.”

“Voting the Social Democrats to the top spot is the only way to make sure you don’t get a right-wing government,” he added.

Rönnholm denied being concerned about either the rising popularity of the Finns Party or the wide advantage of the National Coalition.

“The campaigns have yet been run and people will decide whom to vote later. It’s obviously clear that if the two parties currently in the top positions will form the government, the situation will be very different. We have to work hard,” he said.

“Polls from recent years and decades have shown how much the ratings can swing. Once the campaigns get underway and people see what options are available to them, I think the ratings will become more even and our campaign will yield a good outcome under the leadership of [Prime Minister] Sanna Marin.”