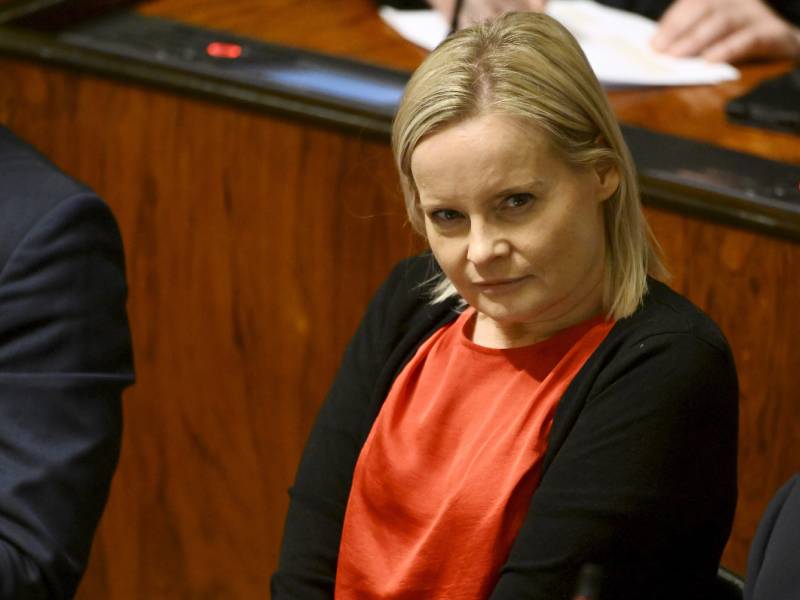 Riikka Purra, the chairperson of the Finns Party, attended a plenary session in the Finnish Parliament on 21 December 2022. Support for the right-wing opposition party has surged by almost two percentage points since late last year, largely because of an influx of female supporters, writes YLE. (Vesa Moilanen – Lehtikuva)

THE FINNS PARTY and the Social Democrats have swapped places as the second and third most popular political parties in Finland, reveals an opinion poll commissioned by YLE.

Support for the populist right-wing opposition party, the poll found, has jumped by 1.9 percentage points since late last year to 19.3 per cent, a half a point higher than support for the Social Democrats.

Tuomo Turja, the managing director of Taloustutkimus, stated to the public broadcasting company that the polling data shows that the surge enjoyed by the opposition party is attributable almost entirely to women. The party, though, is gaining support also from people who abstained from voting in the previous elections and from people who voted for parties from both ends of the political spectrum.

Taloustutkimus interviewed 2,953 people for the poll between 7 December and 3 January.

The Centre Party similarly saw its popularity rise by 1.9 points, to 11.9 per cent. The ruling agrarian centre-right party had slipped below the 10-per-cent mark for the first time ever in the previous poll by YLE.

“The Centre managed to hold on to its former supporters a lot better than in the previous poll. Its growing support stems largely from women and families with children. It’s possible that the additional child benefit has had a bit of an impact on its popularity,” gauged Turja.

“It remains to be seen whether the rise will continue or whether the support will fluctuate between 11 and 12 per cent.”

While the National Coalition remains by far the most popular party in the country, it saw its popularity dwindle by a point to 23.0 per cent – for reasons that remain somewhat unclear, according to Turja.

“One percentage point is a pretty moderate decline. The National Coalition is doing a good job at holding on to its previous supporters,” he said.

Support for the Social Democrats fell by 0.1 points to 18.8 per cent. Turja reminded that it is unusual that the main ruling party is polling at such a high level before the parliamentary elections.  The Green League registered a decline of 0.1 points to 9.6 per cent and the Left Alliance one of 0.3 per cent to 8.6 per cent.

Each of the three smaller parties saw its popularity drop. The Swedish People’s Party dropped from 4.6 to 4.0 per cent, the Christian Democrats from 4.0 to 2.9 per cent and Now Movement from 1.9 to 1.6 per cent.

The Christian Democrats falling back to its usual level of popularity benefited particularly the Centre, according to Turja.

Finns will cast their votes in the parliamentary elections on 2 April. YLE is scheduled to release the results of three more polls before the elections, the first on 2 February, the second on 2 March and the third on 30 March.