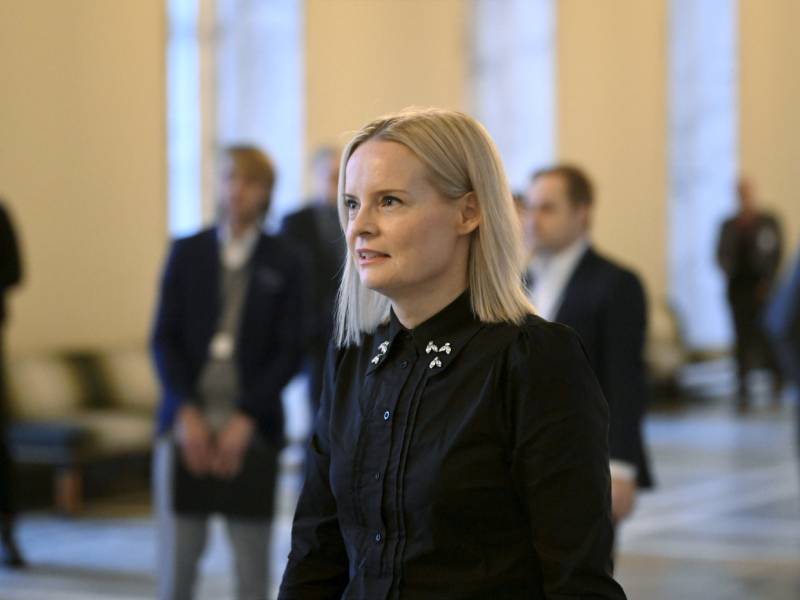 Riikka Purra, the chairperson of the Finns Party, spoke to the media about an interpellation over the government’s effort to prevent youth and gang violence in the Parliament House on 8 December 2022. The Finns Party is presently polling at a level that is twice as high as before the parliamentary elections of 2019, reports Helsingin Sanomat. (Markku Ulander – Lehtikuva)

THE NATIONAL COALITION is heading into the election year as the most popular political party in Finland, reveals the latest opinion poll by Helsingin Sanomat.

Although support for the right-wing opposition party fell by 0.7 percentage points from the previous month to 23.5 per cent, it continues to hold a comfortable, 4.4-point advantage over the Social Democratic Party (19.1%).

Support for the Finns Party rose by half a point to 17.9 per cent, a level that is more than three points higher than in July.

“The Finns Party is heading into the elections from a better position than four years ago. The party is now two times more popular compared to the time before the previous parliamentary elections,” Sakari Nurmela, the managing director of Kantar Public, stated to Helsingin Sanomat on Thursday.

Kantar Public interviewed 2,512 people for the poll between 14 November and 16 December.

Supporters of the populist right-wing opposition party, the poll shows, are more certain about their voting intentions than those of other parties, with over 40 per cent saying they are very sure about their intentions. At the same time, as many as one-third of the supporters said they did not vote or declined to disclose how they voted in the municipal elections held in June 2021.

Nurmela said the data indicates that the party is appealing to voters who have previously abstained from voting. The key for such supporters, he reminded, is making sure they actually show up at polling stations.

“From the Finns Party’s standpoint, what happened in the municipal and county elections was that this group couldn’t be mobilised well enough. In parliamentary elections, though, the party has managed to stun us three times,” Nurmela said, using the Finnish word ‘jytky’ that has come to mean an election win by the Finns Party.

The Green League saw its popularity increase by 0.6 points to 9.8 per cent, only 0.1 points behind the Centre Party. Nurmela told Helsingin Sanomat that support for the latter has fallen below the 10-per-cent mark for the first time ever in the 231 polls the market research company has carried out since 1991.

The parliamentary elections will take place on 2 April 2023.