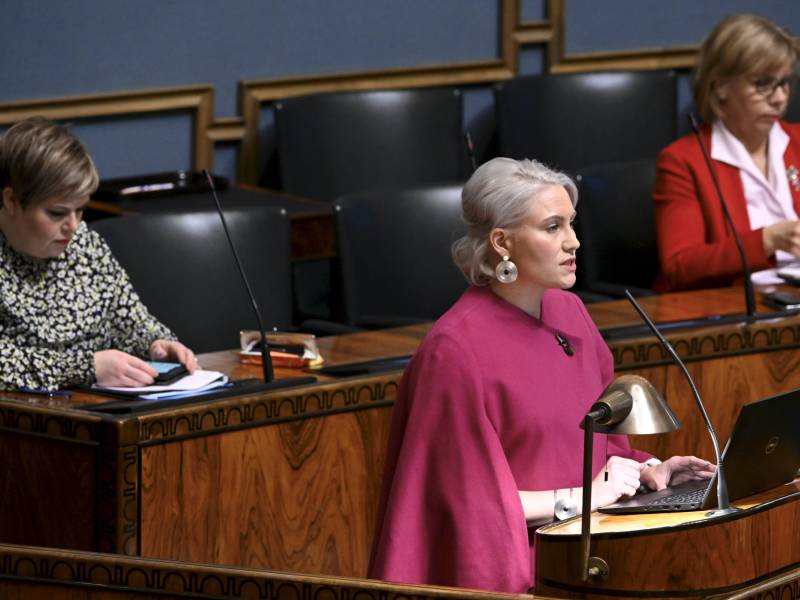 Riitta Mäkinen (SDP) delivered the Social Democrats’ group statement during a plenary session in the Finnish Parliament on Thursday, 15 December 2022. Mäkinen announced that the main ruling party is proposing that electricity prices be capped, taking other political parties by surprise. (Heikki Saukkomaa – Lehtikuva)

THE SOCIAL DEMOCRATIC PARTY on Wednesday took other political parties by surprise by declaring it is proposing that electricity prices be capped at, for example, under 20 cents per kilowatt-hour.

The Social Democratic Party estimated that the costs of the cap could be covered with revenues created by the windfall tax to be imposed on the excess profits of energy companies. Presently being drafted at the Ministry of Finance, the tax is expected to generate around 0.5–1.3 billion euros in revenue starting in 2024.

The proposal raised eyebrows among other parties due to its implications for the central government budget and due to the fact that lawmakers had only begun discussing the budget proposal for next year.

Jouni Ovaska (Centre) also questioned the decision to make the proposal without consulting other members of the ruling five-party coalition.

“This is very confusing and dirty, this is a complete circus,” he slammed according to YLE. “Citizens who’re thinking about this at home don’t want to see this kind of discussion.”

Minister of Finance Annika Saarikko (Centre) estimated that the price cap would cost roughly a billion euros and demanded that all parliamentary parties be invited to a meeting to discuss the matter. She also highlighted that as the windfall tax will not generate revenue until 2024, the cap would have a “massive impact” on the budget deficit.

Antti Lindtman, the chairperson of the Social Democratic Parliamentary Group, viewed that the costs would be at most hundreds of millions.

“There are several options for the price cap system, and we’re open when it comes to how the cap should be implemented. It’s good to look at examples from other European countries; in some, the price cap has been implemented by limiting wholesale prices, in others by setting it on households. Whatever the case we aren’t talking about billions of euros, but rather about hundreds of millions at the most,” he insisted.

“Our estimate is that [the cap will cost] upwards of hundreds of millions of euros and that’s why we’re drafting the windfall tax. These profits can be used to support consumers by compensating for the high electricity prices,” she stated to reporters in Brussels on Wednesday.

The existing measures, she viewed, have proven insufficient to support households as electricity prices have risen as high as 60 cents per kilowatt-hour.

“Citizens are struggling here and now, and we have to react to it here and now. We can’t wait until 2024 because people need help and support this winter,” she was quoted saying by Helsingin Sanomat. “Profits [from the windfall tax] can be used to cover the costs, even though they come retroactively. I don’t like to think that budget technicalities could become a problem for how we help people in this acute situation.”

Marin also revealed that a meeting of all parliamentary parties has been scheduled for Monday.

Economists on Thursday reminded that the notion of an electricity price cap is not without its problems, in particular because it would not encourage consumers to save electricity and could increase the risk of blackouts.

“The price is trying to tell customers that they should consume less,” Marita Laukkanen, a senior researcher at VATT Institute for Economic Research, summarised to Helsingin Sanomat.

While the Social Democratic Party has yet to release the details of its proposal, Laukkanen voiced her displeasure with using the term ‘price cap’ to refer to a mechanism where the government effectively covers the difference between the cap and spot electricity price.

“How many different support schemes for consumers do we need?” she asked. “We already have the value-added tax cut, the electricity deduction for income tax or, if you’re on a low income, the electricity subsidy.”

The government, she viewed, should rather target the existing schemes better at consumers who are in financial hardship due to soaring electricity costs: the tax deduction could have included a maximum income limit, whereas the making support conditional on consumption could have encouraged electricity saving.

“It feels like the tab is just wide open here. You’re targeting these support schemes at absolutely everyone without thinking who are really in a tough spot.”

Essi Eerola, the head of domestic economic policy process at the Bank of Finland, similarly viewed that the government should rather mull over measures that “do not increase the probability of blackouts,” such as schemes that incentivise households with affordable electricity agreements to reduce consumption.

A price cap, she added, could be beneficial as a mechanism that is activated when electricity prices spike momentarily due to cold or calm weather.

Also Christine Lagarde, the governor of the European Central Bank, has urged decision-makers in the eurozone to target support schemes carefully and forgo measures that undermine incentives to reduce energy consumption.