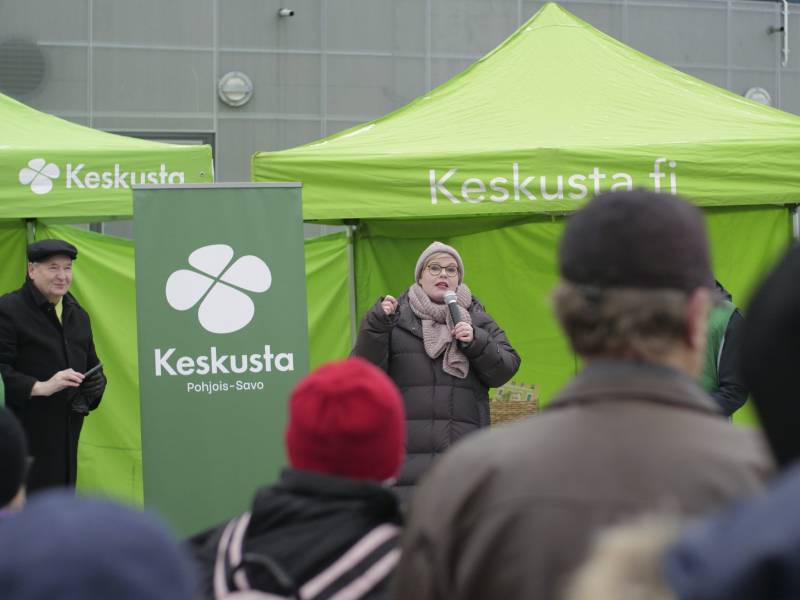 Minister of Finance Annika Saarikko (Centre) addressed the public at the market square in Kuopio, Northern Savonia, on 26 November 2022. Support for the Centre Party has fallen nearly two percentage points over the past month, reveals a new opinion poll commissioned by YLE. (Lassi Lapintie – Lehtikuva)

SUPPORT for the Centre Party has slipped below 10 per cent for the first time ever in a poll commissioned by YLE.

The Finnish public broadcaster revealed yesterday that popular support for the centre-right ruling party has plummeted by 1.9 percentage points to 9.0 per cent. The poll was conducted as the party was embroiled in disputes with its coalition partners on, for instance, nature conservation, nature restoration and Sami Parliament.

“[The Centre being the key instigator] doesn’t seem to have increased support for it, on the contrary,” gauged Tuomo Turja, the managing director of Taloustutkimus.

The Centre saw its popularity decrease among 35–64-year-olds and especially among women. Its decline has benefited especially the National Coalition, but also the Social Democrats and Finns Party, according to Turja.

The nature-related disputes reflected differences of view particularly between the Centre and Green League. While also the Green League saw its popularity decline by 0.4 points, it sneaked ahead of its arch rival with an approval rating of 9.7 per cent.

With the Left Alliance picking up 0.4 points to climb to 8.9 per cent, it is polling virtually neck and neck with the Centre.

The National Coalition, Social Democrats and Finns Party all saw their popularity grow from the previous poll. Support for the National Coalition crept up by 0.1 points to 24.0 per cent, leaving it firmly in the poll position with only months to go until the parliamentary elections held in April. Support for the Social Democrats and Finns Party both rose by 0.7 points to 18.9 and 17.4 per cent, respectively.

“The main ruling parties are typically getting quite a beating [at this point of the electoral cycle],” said Turja. “But the Social Democrats’ situation is looking pretty good as we start preparing for the elections.”

Support for the Swedish People’s Party fell by 0.4 points to 4.6 per cent, whereas the Christian Democrats saw its popularity jump by a whole point to 4.0 per cent. Movement Now registered a 0.1-point drop in its popularity, falling to 1.6 per cent.

“The Christian Democrats has managed to get its old supporters behind it for the first time in a while,” Turja noted.

Taloustutkimus interviewed 2,709 people for the poll between 7 November and 5 December.