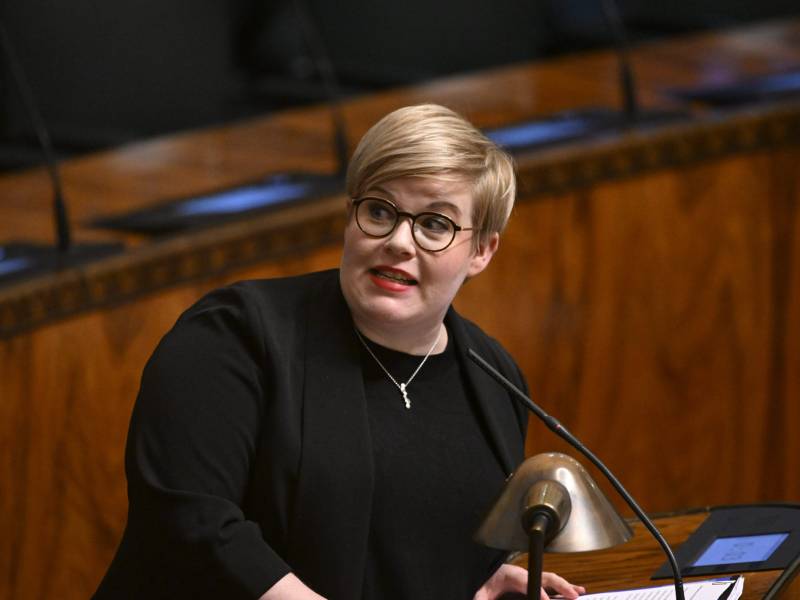 Minister of Finance Annika Saarikko (Centre) reacted during a plenary session in the Finnish Parliament on Tuesday, 15 November 2022. The Centre, she indicated, intends to hold fast to its views on issues as the government is scrambling to meet its promise to present all new bills to the Parliament by Thursday, 17 November. (Vesa Moilanen – Lehtikuva)

PRIME MINISTER Sanna Marin (SDP) on Tuesday said the government will submit its bill for a new act on the Sami Parliament to the Parliament on Thursday.

“I consider this an important human rights question from the viewpoint of indigenous peoples,” she explained when asked about the disputed bill at a joint press conference in Helsinki with Estonian Prime Minister Kaja Kallas.

The Centre Party responded to the announcement immediately, having tabled the bill at the two previous government meetings in a bid to postpone the project until the next electoral term. Eeva Kalli, the chairperson of the Centre Parliamentary Group, expressed her disapproval with the course of action taken by the prime minister.

“We don’t think this is a good course of action. But negotiations within the government are continuing when it comes to the large-scale issue. And the Centre is doing its part to try to find solutions,” she was quoted saying to reporters in the Parliament House by Helsingin Sanomat.

Kalli was referring to other disputed proposals, such as additional budget appropriations for agriculture and health care, that have hit a standstill due to discord within the government. The Parliament must receive all new legislative proposals by tomorrow in order to be able to process them by the parliamentary elections taking place on 2 April 2023.

The Social Democratic Party has called for an additional 700 million euros to clear the backlog in health care. The Centre, in turn, has advocated for a 200–400-million-euro package to support agricultural businesses.

“The Centre will stand by the spending limits that the government has imposed on itself,” Minister of Finance Annika Saarikko (Centre) said according to YLE. “The sums and proposals discussed in public exceed those spending limits. If that kind of sums are considered, we have to take away from something else.”

Also she voiced her disapproval with the decision to move forward without a government-wide agreement on the act on the Sami Parliament. The government, she lamented, did not warm up to a proposal to set up a parliamentary task force to prepare the bill.

“I noticed in the media and heard from the prime minister this morning that other ruling parties don’t seem to have the readiness to undertake this work,” she said in the Parliament House.

Saarikko also underscored the importance of having a functioning government amid the uncertainty caused by external events.

“We’re ready to do our part to find solutions, but we have our boundary conditions, too. When there are five parties at the same table, it’s clear that the Centre’s views will differ from those of other ruling parties on many questions. We must now reach an agreement, and hopefully we’ll start working toward that shortly under the prime minister’s leadership,” she said.

The Centre, she added, will not accept blame for the discord within the government.

“It’s just and right that we hold on to our own views. They differ from those of other ruling parties in many regards. It isn’t easy to make decisions, but everyone must be ready to look for solutions so that the government is able to continue its work,” said Saarikko.