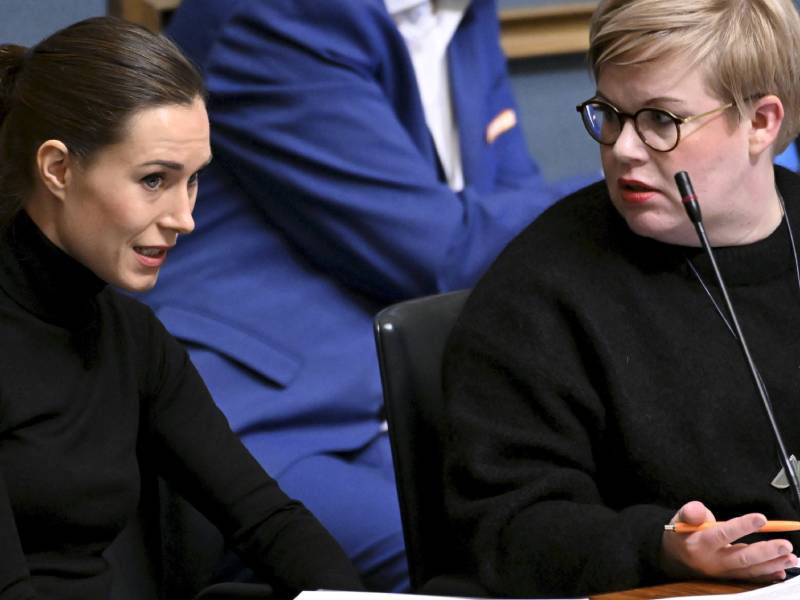 Prime Minister Sanna Marin (SDP) and Minister of Finance Annika Saarikko (Centre) reacted during a plenary session in the Finnish Parliament on Wednesday, 9 November 2022. Saarikko on Wednesday argued that the revisions introduced to the government’s response to an interpellation on nature restoration are a win for the Centre Party. (Heikki Saukkomaa – Lehtikuva)

THE FINNISH GOVERNMENT on Wednesday presented its response to an interpellation submitted by the opposition parties over the nature restoration law proposed by the European Commission.

The opposition is accusing the government of inconsistency and failure to protect national interests in regards to the proposal, arguing that the proposal would not only be costly but over-extend into the domain of forest policy.

“The restoration law has an important purpose, but the proposal isn’t acceptable without key amendments,” she was quoted saying in the Parliament House. “Unless Finland’s overall interests are realised, Finland can vote against the law.”

“The government also considers it important that the restoration measures are voluntary for land owners. The most important measure is to reduce the costs of Finland, which are estimated to rise to 930 million euros. This is definitely the most important thing we’re pursuing.”

Marin assured on the one hand that the country is committed to halting biodiversity loss and recognises the need to improve the state of the environment, but confirmed on the other that the government is sending the message that forest policy falls strictly within the purview of national decision makers.

The issue had pushed the coalition government at the brink of crisis due to the difficulty of finding language that was acceptable to the Centre. After reportedly dozens of hours of preparatory work, the response was revised relatively significantly in terms of language but not necessarily in terms of actual content.

“Unless an acceptable overall agreement is reached in the negotiations, Finland has the grounds to vote against the outcome. Finland will form its final stance on the proposal’s content and decision on the vote at the last stage of the negotiations by evaluating its overall interests,” the revised response reads.

The unrevised stance referred similarly to “an acceptable overall agreement”, specifying that it is conditional on reducing costs significantly and securing or increasing the leeway of member states and flexibility in regards to restoration measures.

The Centre Parliamentary Group claimed the revisions as a victory.

“I’ve noticed that our coalition partners have levelled even quite severe criticism at us. I reckon it’s an indication that the outcome is precisely what we were hoping for. And that’s how it should be,” Minister of Finance Annika Saarikko (Centre) stated to Helsingin Sanomat.

The opposition parties argued yesterday that the government should adopt a clearly negative stance on the proposal, a view that was expressed, among others, by Sanni Grahn-Laasonen (NCP).

“The commission’s proposal for the EU’s restoration law is so flagrantly unfair and costly for Finland that it should be absolutely clear that Finland should’ve opposed the law from he get-go like Sweden,” she stated.

Riikka Purra, the chairperson of the Finns Party, estimated that the proposal should be rejected outright on principle. “We won’t stand by pillaging Finnish forests a lot, but also not for pillaging them a bit less,” she declared.

Sari Essayah, the chairperson of the Christian Democrats, called attention to the apparent divisions within the ruling party, especially those between the Centre and Green League. “There has been a race to deliver at least two different messages from Finland to Brussels,” she said.