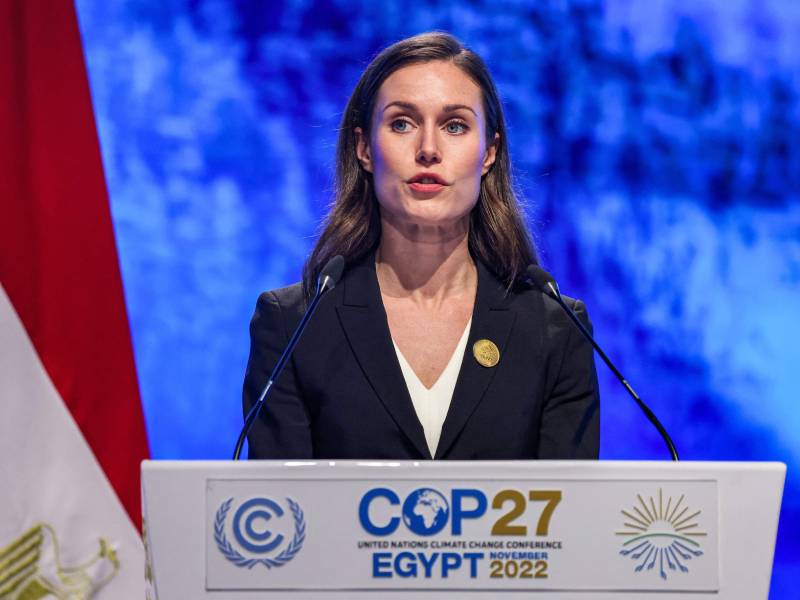 Prime Minister Sanna Marin (SDP) delivered a speech at COP27 in Sharm el-Sheikh, Egypt, on Monday. Some ruling party members have drawn attention to the disconnect between her calls for more climate action on the global stage and opposition to such actions at home. (Ahmad Gharabli – AFP / Lehtikuva)

SOME MEMBERS of the Green League and Left Alliance have criticised Prime Minister Sanna Marin (SDP) for failing to back her statements on the international stage on climate and the environment with actions at home, reports Helsingin Sanomat.

Jenni Pitko (Greens) on Tuesday said the premier seems to be acting duplicitously.

“Think about if the leader of another country was globally calling for action to stop the climate crisis and biodiversity loss but supported thwarting such actions domestically,” she tweeted. “I expect to prime minister to deliver as resolute a response to the interpellation about the EU’s [nature] restoration [law] than what she just delivered in Egypt.”

The same contradiction caught the attention of Veronika Honkasalo (LA).

“It’s difficult to understand how you’re travelling the world to tell how important it is to do whatever we can to fight the climate crisis while the Social Democrats is positioning itself to oppose a government proposal concerning the restoration law. Could there be a starker contrast between words and action?” she tweeted.

The lawmakers are referring to the remarks Marin made at COP27 in Sharm el-Sheikh, Egypt, on Monday. The prime minister demanded that world leaders back their climate plans with concrete action, warning that the longer actions are postponed the more they will cost and describing the 2020s as a critical decade where every single measure is important.

She also patted her government on the back for adopting an ambitious climate programme, pointing to the climate-neutrality goal for 2035.

Meanwhile, members of the ruling coalition have found themselves at loggerheads over a proposal to restore up to 20 per cent of land and water areas in the European Union. The Centre, Social Democrats and Swedish People’s Party have joined the opposition parties in opposing the government’s original stance on the proposal by the European Commission.

The Greens and Left Alliance are thus the only ruling parties still supporting the stance.

The government has to submit its response to an interpellation concerning the restoration proposal on Wednesday, with a confidence vote looming on Friday.

Niina Malm, the deputy chairperson of the Social Democrats, told Helsingin Sanomat at the beginning of the month that the ruling party believes decisions on forest policy do not fall within the purview of the European Union.