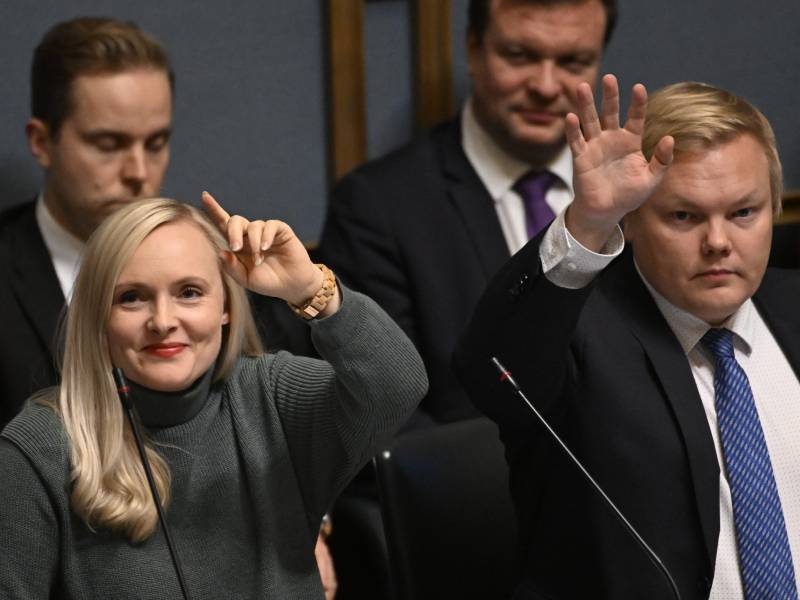 Minister of Climate Change and the Environment Maria Ohisalo (Greens) and Minister of Agriculture and Forestry Antti Kurvinen (Centre) asked for the floor during a question-time debate in the Parliament on 13 October 2022. The Centre and Greens have butted heads over a number of forest policy-related issues, including the nature restoration regulation proposed by the European Commission. (Markku Ulander – Lehtikuva)

THE GOVERNMENT of Prime Minister Sanna Marin (SDP) is scrambling to draft its response to an interpellation presented by opposition parties about the nature restoration regulation proposed by the European Commission, reports Helsingin Sanomat.

The newspaper wrote yesterday citing eight sources that the government is “struggling enormously” to agree on language that is acceptable also to the Centre Party.

Sources from several ruling parties revealed that the ruling party is continuing to make new demands to, effectively, move the goal post further and further. The Centre has demanded that the government position on the proposal be revised during the parliamentary process to include tougher language, receiving support not only from the National Coalition but also from the Social Democrats and Swedish People’s Party.

The Green League and Left Alliance, in turn, have supported the position the ruling parties agreed on originally, which also views that the proposal must be amended.

Tiina Elo (Greens) in October outlined that the government’s position supports the goals of the regulation but also makes critical observations on, for example, the cost impacts, lack of data, uncertainties related to impact assessments and the varying circumstances and leeway of member states.

“The unusual thing about this is that the ruling parties don’t even disagree on the restoration regulation. They’re all calling for changes to it. This isn’t about content, but about creating impressions,” one source stated to Helsingin Sanomat on Monday.

Also Iltalehti and Ilta-Sanomat wrote yesterday about the disagreement that, at worst, could topple the government.

The government has to respond to the interpellation on Wednesday, with a confidence vote looming on Friday. Most of the Centre’s lawmakers siding with the opposition parties would be enough to swing the vote in favour of no-confidence.

The dispute is widely attributed to the struggles of the Centre, according to Helsingin Sanomat. The party has sought to disrupt the work of the government throughout the autumn in a bid to put an end to its abysmal performance in opinion polls.

Helsingin Sanomat on Monday wrote that four of its sources believe the party is seeking to prolong the process to coerce the prime minister to declare that the country will vote against the regulation unless its amendment demands are met. Other members of the ruling coalition pointed out that adopting a categorically negative position is dubious because the proposal will not be put to a vote until after the parliamentary elections held in Finland in April 2023.

The impasse was described as absurd by many of the sources, according to the newspaper. Finland’s official position on the regulation, they reminded, is not defined by how the government responds to the interpellation, but rather by the Parliament’s Grand Committee late in November.

The European Commission is proposing in its draft regulation that at least 20 per cent of forest, water and wetland areas in the 27-country bloc be restored by 2030. It is noteworthy that restoration, as defined by the commission, does not signify protection but simply the restoration of the habitat type from the 1950s.

The proposal has driven a wedge between the ruling parties throughout the autumn.

It has also come under criticism from other stakeholders in Finland. Finnish Forest Industry has argued that the restoration target and associated costs are unfair because the country started utilising its forest resources later than other member states.

The Association of Finnish Municipalities, in turn, has criticised the proportional targets set for increasing green areas in cities and municipalities.

“In Finland, municipalities consist of a lot more than densely built residential areas. The obligation to increase [green areas] by three per cent could mean hundreds of hectares of new green areas in a single municipality in Finland,” Miira Riipinen, the head of urban development and environment at the Association of Finnish Municipalities, told Helsingin Sanomat in October.

“Our interpretation is that it’d radically affect construction,” she summarised.

CORRECTION: An unedited version of this article erroneously claimed that the Parliament will vote on confidence in the government on Wednesday. While the government has to respond to the interpellation on Wednesday, the vote is set to take place on Friday.