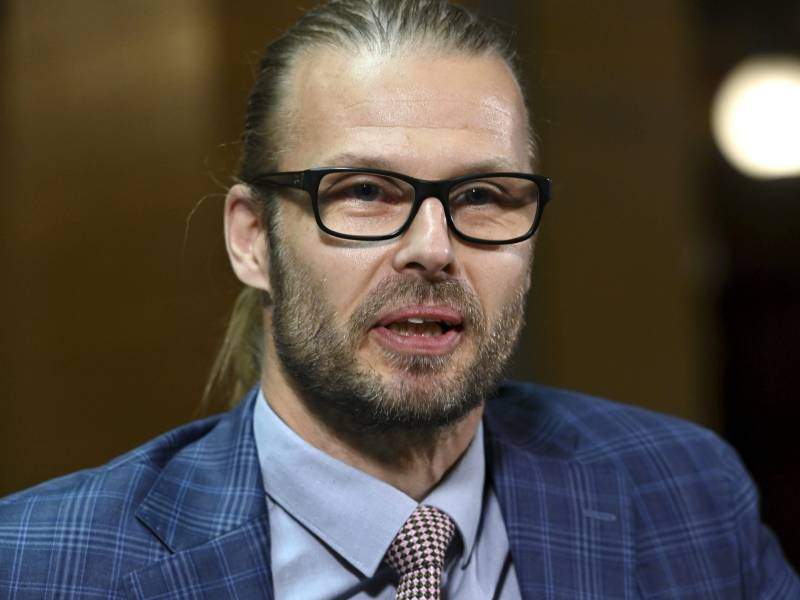 Mika Niemelä, the head of the budget department at the Ministry of Finance, was photographed arriving for the government’s budget session at the House of the Estates in Helsinki on 31 August 2022. Niemelä on Wednesday released a report calling for the adoption of significantly stricter rules on central government spending. (Heikki Saukkomaa – Lehtikuva)

A TASK FORCE led by Mika Niemelä, the head of the budget department at the Ministry of Finance, is calling for new, substantially more stringent rules for the use of general government finances in a report published on Wednesday, 2 November.

The rules were drawn up to curtail the growth in central government and other public sector debt by the end of the decade.

“If there happens to be a surplus because the economic situation is good, it should be used primarily to make debt repayments,” Niemelä summarised to Helsingin Sanomat.

The rules would signal a shift toward more strict management of public finances from the so-called steering framework that dates back to 2003 and enables governments to set a cap on spending for the entire electoral term.

The task force stated in its final report that the credibility of the mechanism has been put to the test during the current parliamentary term, with the government taking liberties with its economic policy objectives partly due to the exceptional circumstances.

“The credibility of sustainable fiscal policy has been eroded by, for example, the breaching of expenditure ceilings, abandoning the government programme objective concerning the balance of general government finances, low regard for the EU-related rules guiding fiscal policy and difficulties associated with the clear communication of fiscal policy objectives,” its summary reads.

“The erosion of rules must be halted to prevent a trend that leads to the implementation of uncontrolled economic policy.”

Finnish politicians, the task force views, should commit to abiding by the rules across party lines because there are no guarantees that the next government has the courage to start tackling the cycle of borrowing. The cycle is set to continue even without increases in public expenses because the government is to run up eight billion euros in additional debt a year based on its policy decisions and latest forecasts.

Breaking the cycle is key for enabling the country to finance its response to future crises and cope with the ramifications of global warming and population ageing, according to the task force.

The task force proposes that long-term debt sustainability, as measured by the long-term development of the debt ratio, be adopted as the premise of economic policy-making as of the next electoral term. Each government should in its action plan set forth a clear target for its budgetary position – the difference between public revenue and expenditures – and a set of actions required for reaching it, including spending cuts worth billions of euros.

The target would be binding irrespective of economic cycles.

Niemelä admitted to Helsingin Sanomat that it is difficult to make sure that every political party is committed to reining in the debt burden and that governments can resist the temptation of pushing the problem to their successors.

“If a joint commitment isn’t enough to reduce debt, taking care of it should be enshrined in law. But that’s not what we’re proposing now. We mustn’t, however, leave our children and grandchildren to look after an over-indebted country,” he underscored.

He also confirmed that governments would have to either refrain from carrying out reforms that significantly increase public expenditures or make structural adjustments that reduce the costs of society.

“That’s necessary because we’re constantly living beyond our means,” he said.

The task force proposes that the current steering framework be upheld with adjustments that enhance its rigidity. Investments in research, development and the green transition, it views, should be retained within the framework to prevent governments from redefining certain cost items as investments to pursue their political goals.

Fixed-term future investments and spearhead projects should similarly be prohibited due to problems assessing their impacts, even though they have been funded through asset sales.

The task force would allow governments to utilise the so-called escape clause as an emergency brake in the event of a major crisis, such as the coronavirus pandemic or the Russian war of aggression in Ukraine. The criteria for triggering the clause and the amount of funding released by the clause should be clearly defined government programme, however.

Niemelä told Helsingin Sanomat that the clause should contain a self-financing contribution in order to put a stop to the kind of borrowing witnessed this electoral term.

The task force would also impose new conditions on tax policy decisions to prevent governments from circumventing the spending limits by means of taxation.

Tax policy decisions inscribed in the government programme, meanwhile, should be based on careful impact assessments carried out by the Ministry of Finance. The rules would fundamentally prohibit ruling parties from making tax cuts or increases simply on ideological grounds, according to Helsingin Sanomat.

The central government should additionally refrain from assigning new responsibilities on the newly established well-being services counties, in part because of the increase in costs and staff requirements arising from the obligations imposed by the current government.

The assignment of any new obligations should be offset by the central government either financially or by a proportionate reduction in other obligations.

Although the funding of the counties should fall within the spending framework in its entirety, there should be room to manoeuvre within the framework in case of unexpected needs. The flexibility could be accomplished by, for example, a provision that could not be used for other expenditure, the task force estimated.