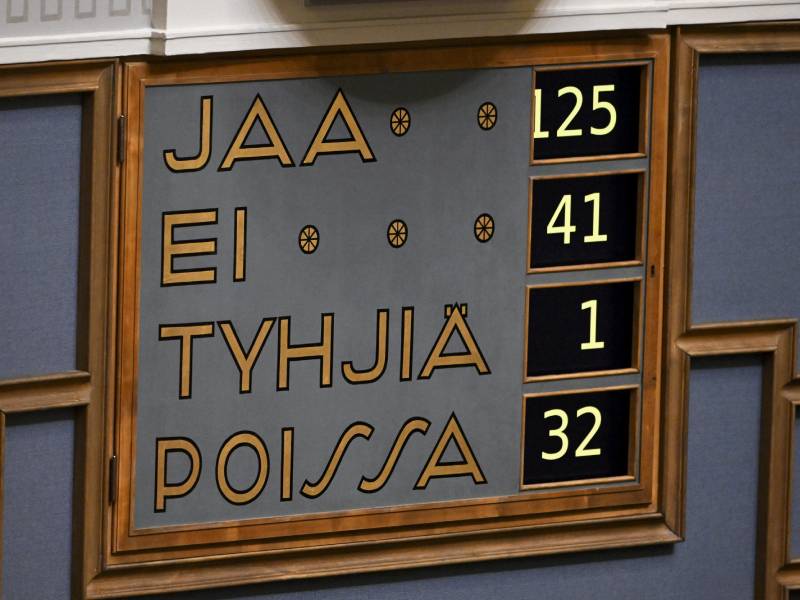 A board displays the results of a vote on a bill to reform the Finnish act on terminating pregnancy in the session hall of the Finnish Parliament on Wednesday, 26 October 2022. Four of the nay-votes came from representatives of the Centre Party, a member of the ruling five-party coalition. (Vesa Moilanen – Lehtikuva)

MEMBERS of the Finnish Parliament on Wednesday voted 125 to 41 in favour of reforming the outdated termination of pregnancy act, reports Helsingin Sanomat.

Also voting against the bill was the one-man parliamentary group of Ano Turtiainen.

The only blank vote came from Hanna-Leena Mattila (Centre). Thirty-two lawmakers were absent from the vote.

The requirement for supporting statements from two physicians will also be abolished.

The bill is set to enter into effect no earlier than in early 2023.

It is based on a citizens’ initiative that received the requisite 50,000 statements of support in the second half of 2020. The Parliament’s Social Affairs and Health Committee then expressed its backing for some of the objectives of the initiative, arguing for example that ensuring pregnancy is terminated as early as possible reduces the need for analgesics and hospital care.

The report issued by the committee was not unanimous, however. Aittakumpu (Centre), Kinnunen (Centre), Lohi (Centre), Petri Huru (PS) and Jari Koskela (PS) attached a dissenting opinion to the report, demanding that the entire act be overhauled.