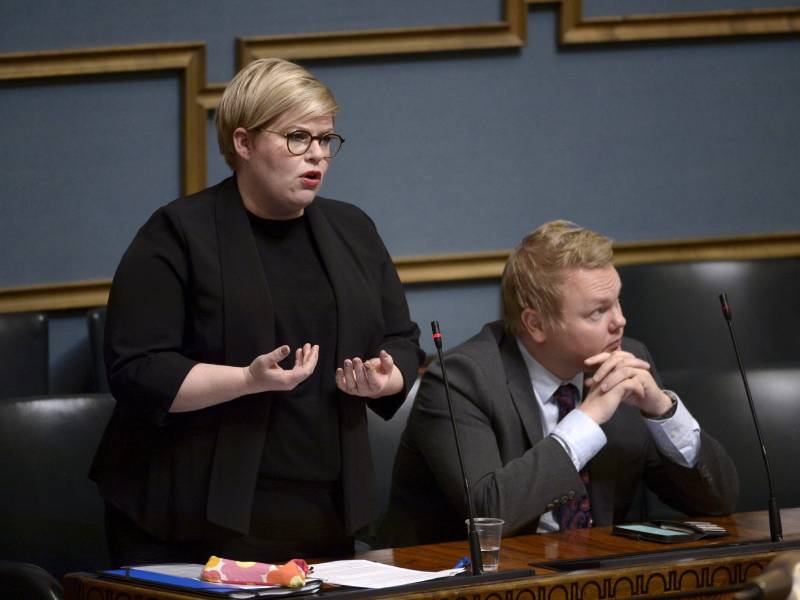 Ministers Annika Saarikko and Antti Kurvinen from the Centre Party were photographed in the session hall of the Parliament House on Wednesday, 19 October 2022. Saarikko, the chairperson of the agrarian conservative party, has an uphill battle ahead of her to reverse the fortunes of the party by next year’s parliamentary elections. (Mikko Stig – Lehtikuva)

POPULAR SUPPORT for the Centre Party has fallen to an all-time low, according to the latest opinion poll conducted for Helsingin Sanomat by Kantar Public.

Support for the conservative agrarian party decreased by 1.4 percentage points from the previous month to 10.4 per cent in October, marking only the third time it has slipped below 11 per cent. The party was polling at 10.8 per cent in September 2020 and January 2021.

Although the Centre retained its status as the fourth largest party in the country, the status is increasingly under threat from its main political rival, the Green League (9.0%).

Helsingin Sanomat on Wednesday wrote that the polling data indicates that the party would receive the vote of only about half of people who had backed it in previous elections. While many of them appear to have joined the undecided camp, some have shifted their support for the Finns Party and National Coalition.

Changes in the poll were fairly noticeable also in other regards.

The National Coalition saw its popularity increase by 0.6 points to 24.2 per cent, the second highest reading since October 2011. Support for the Social Democrats continued to dwindle, dropping by 0.2 points to 19.0 per cent. The centrepiece of the ruling five-party coalition polled at 20.1 per cent in July.

Support for the Finns Party has contrastively risen steadily since June, jumping by 1.2 points to 17.3 per cent between September and October.

The Left Alliance was the only red-green party to see an increase in its popularity, rising from 8.0 to 8.3 per cent. Support for the Green League decreased by 0.6 points to 9.0 per cent, while the Christian Democrats and Movement Now registered drops of 0.2 and 0.3 points to 3.2 and 1.7 per cent, respectively.

The Swedish People’s Party saw its popularity creep up by 0.2 points to 4.6 per cent. Support for Prime Minister Sanna Marin’s (SDP) ruling coalition thereby stands at 51.3 per cent, representing a drop of 1.7 points from September.

The next parliamentary elections will take place on 2 April 2023.