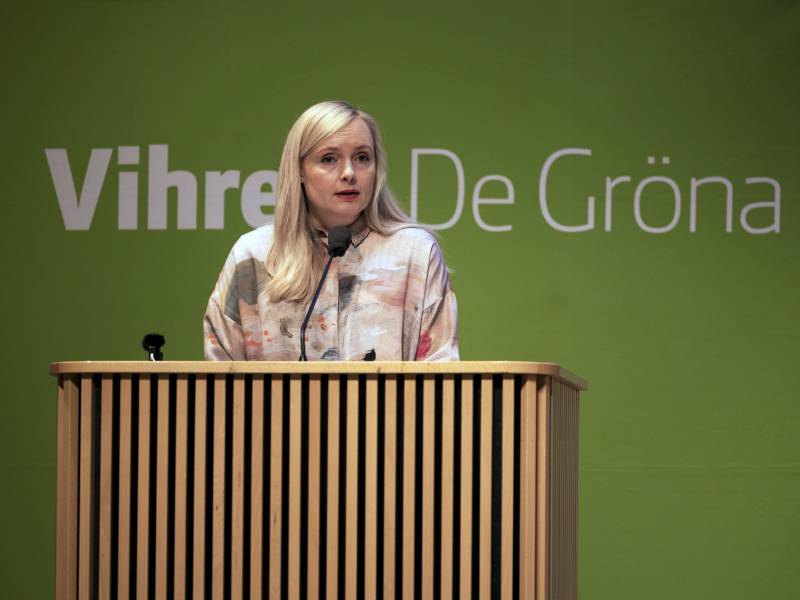 Minister of the Environment Maria Ohisalo (Greens) addressed the Green League’s party conference in Kuopio on Saturday, 24 September 2022. Ohisalo argued in her speech that state-owned companies should not invest a single euro more in fossil industries. (Matias Honkamaa – Lehtikuva)

MINISTER of the Environment Maria Ohisalo (Greens) is calling for greater continuity in policy-making dealing with the climate and green transition.

Ohisalo on Saturday underlined in her speech to the party conference that the outlook for businesses making investments in projects that create benefits for the climate and environment must be upheld beyond electoral terms, according to Helsingin Sanomat.

Policy-makers, she added, must acknowledge the major global trends that show that the fossil economy is in its twilight years. Although Uniper, the German natural gas-reliant subsidiary of Finland’s Fortum, collapsed in part because of the war of aggression waged by Russia, it does not change the fact that the profitability of new forms of energy is increasing dramatically.

“Mistakes made years ago can’t be undone, but we can still avoid making future mistakes. I think one thing is clear: state-owned companies should not invest a single euro in fossil industries,” declared Ohisalo.

She also demanded that state subsidies, state-owned companies and state-run projects in general not cause significant detriment to the environment, biodiversity or natural habitats.

Ohisalo admitted that the coming years will be challenging economically. It still does not that mean policy-makers should make reckless spending cuts, she argued, but should simply weigh up more investments more carefully. The priority should be on identifying issues that require attention urgently in education, according to her.

“I personally think that particularly important investments in education are those in early-childhood education, fixing the basics of basic education, new study places in higher education, and research, development and innovation,” she said.

“We shouldn’t compromise on these as they’re the seeds of future growth.”

The Green League on Sunday indicated its willingness to explore means to implement dual municipal residence by creating the concept of secondary place of residence, for example.

“Remote work – or work without location requirements – offers an opportunity to choose your place of residence more freely. It makes it possible to live further away from growth centres, in the countryside or sparsely populated areas,” its newly approved rural and regional policy programme states.

A study conducted in the last electoral term concluded that the prospect of splitting taxation, right to vote and right to stand as a candidate between multiple localities was “problematic” from a constitutional viewpoint. The notion has since re-emerged due to the remote work boom kindled by the coronavirus pandemic and the need to promote the vitality of shrinking municipalities.