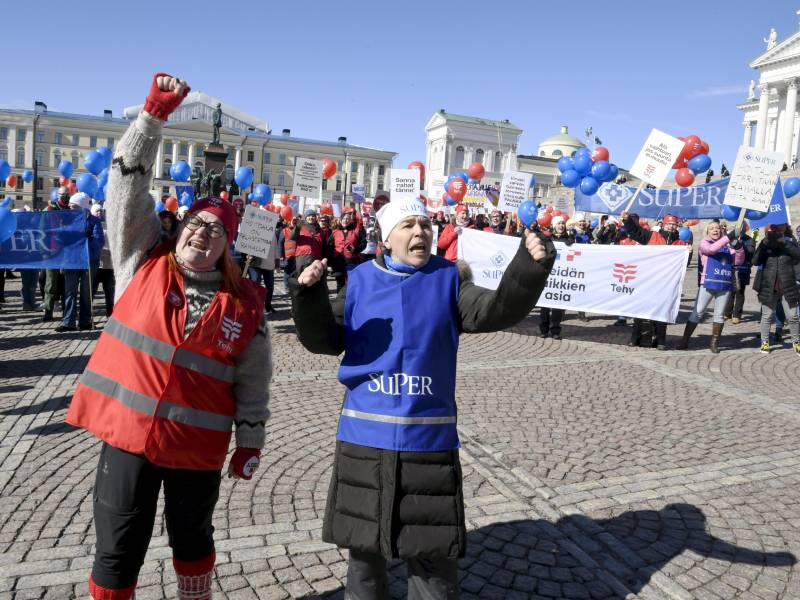 Chairpersons Millariikka Rytkönen of the Union of Health and Social Care Professionals (Tehy) and Silja Paavola of the Union of Practical Nurses (Super) took part in a demonstration calling for higher wages and better working conditions for nurses in Helsinki on 9 April 2022. The two unions announced last week they will follow through with their threat to stage mass resignations in response to the government moving forward with a bill that would limit the right of nurses to go on strike. (Jussi Nukari – Lehtikuva)

MOST MEMBERS of the Left Alliance are expected to vote for a disputed government bill that would limit the right to industrial action after the party managed to introduce amendments to the bill.

Helsingin Sanomat on Friday reported that nurses would face no repercussions for failing to comply with an order to work while on strike or after resigning under the amendment bill. Trade unions, in turn, could be subjected to more sanctions if they fail to engage sufficiently in talks over the essential duties to be protected during industrial action.

Another key amendment to the bill, the newspaper wrote, is that regional state administrative agencies could not impose a temporary ban on an industrial action for more than four times.

The Finnish Parliament will vote on the bill on Monday.

The Left Alliance Parliamentary Group threatened last week to vote against the bill unless it is amended. Such a move would have cast in doubt its future in the ruling five-party coalition led by Prime Minister Sanna Marin (SDP).

“Of course we weighed in our evaluation the fact that if we didn’t vote for the bill, it’d effectively spell the end of our coalition co-operation. But the bill does have to be acceptable, that’s the priority,” Li Andersson, the chairperson of the Left Alliance, admitted to Helsingin Sanomat on Friday.

Some members of the ruling party remain opposed to the bill despite the amendments. Anna Kontula (LA), for example, told the newspaper that she will vote against the bill assuming that no further amendments are made over the weekend.

“I can’t regard it as a positive that the regional state administrative agency can halt a strike four times. It clearly represents a tightening of the law,” she said. “Already enacting this act will inevitably interfere with the right to industrial action – even if it isn’t used at all. If you go about limiting basic rights, you should have valid justification for doing so.”

Marin on Thursday estimated that the act remains necessary even though a district court has imposed a provisional injunction on the intensive care strikes announced by the Finnish Union of Practical Nurses (Super) and the Union of Health and Social Care Professionals (Tehy). The unions will, though, follow through with their threat to stage strikes in home care, including one in Helsinki on Tuesday.

“The situation is genuinely very serious,” she stated to reporters in the Parliament House. “We have a ministerial obligation to move forward with this kind of legislative action if there’s a risk that people’s lives and health are put at risk – as is the case in home care as far as I know.”

Super and Tehy on Thursday responded to the injunction by calling off the strikes in intensive care and declaring that they will instead resort to mass resignations. They also imposed a temporary ban on employee transfers between duties of social and health care units.

Helsingin Sanomat on Saturday wrote that its survey indicates that numerous nurses are prepared to resign. More than half of the almost 4,000 people who responded to the newspaper’s survey said they are prepared to terminate their employment as part of the protracted labour dispute, some citing their ire with the plan to limit the right to strike and others the exhausting nature of their work.

The newspaper was unable to verify that all of the respondents are actually employed as nurses.