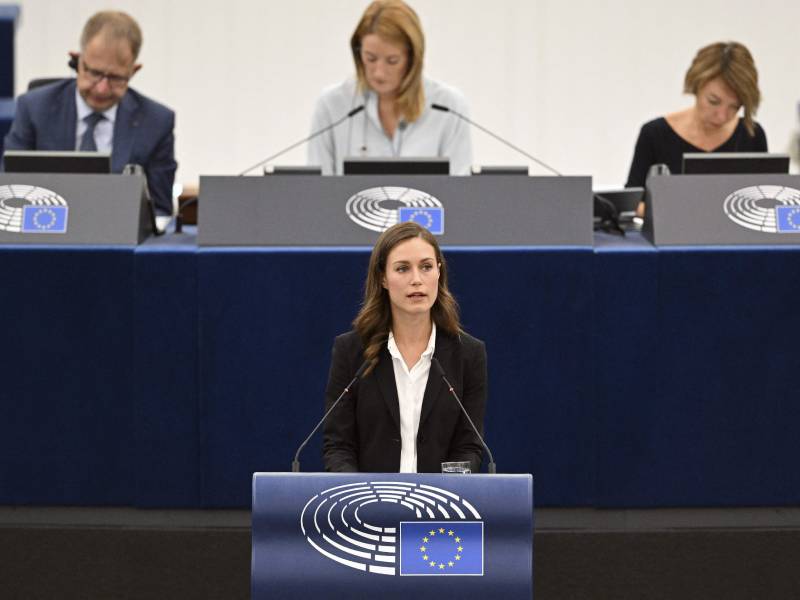 Prime Minister Sanna Marin (SDP) delivered a speech to the European Parliament in Strasbourg, France, on Tuesday, 13 September 2022. Marin on Tuesday also offered her thoughts on the political dispute over means to protect patients from the effects of intensive care strikes announced by two nurses unions. (Frederick Florin – AFP / Lehtikuva)

PRIME MINISTER Sanna Marin (SDP) has commented on the political dispute over a government bill that would restrict the right of nurses to stage strikes, reports YLE.

Marin on Tuesday stated in Strasbourg, France, that she hopes all ruling parties will play by the commonly agreed rules. “The government will be unanimous on this and everyone will vote for this law. I’m sure we’ll have to have a discussion about the common rules in the Parliament,” she declared.

She revealed that she had already discussed the issue with Minister of Education Li Andersson, the chairperson of the Left Alliance.

Minister of Family Affairs and Social Services Aki Lindén (SDP) on Monday told Demokraatti, the organ of the Social Democrats, that the government has reached an agreement on its proposal for a so-called patient safety act. The Left Alliance, though, declared immediately after his statement that it cannot approve the bill in its current form, saying it would continue to pursue amendments to it in the Parliament.

Marin on Tuesday said she appreciates the concerns of the ruling party and other parties.

“Committees can always complement the law. Also the Constitutional Law Committee will discuss the issue, but the timetable is tight and we have to play by the commonly agreed rules,” she was quoted saying by the public broadcasting company.

Jussi Saramo, the chairperson of the Left Alliance Parliamentary Group, on Tuesday clarified that the group is not intent on making amendments to the bill a condition on its continued commitment to the ruling coalition.

The interpretation had been made by, for example, Kansan Uutiset, the main mouthpiece of the Left Alliance.

Andersson on Tuesday said the left-wing party considers the right of employees to strike extremely important but added that it should not be exercised to put the lives of others in peril. The government thus has the responsibility to take action and present its patient safety act bill to the Parliament.

“The Left Alliance’s parliamentary group has announced it hasn’t signed off on the bill’s content because it hopes that the law can be defined more clearly during the parliamentary process,” she said to journalists in the Parliament House on Tuesday.

The bill, she highlighted, was drafted under significant time constraints, and the government has consequently not had the opportunity to weigh up all the feedback thoroughly.

“I’m hoping also for this reason that the parliamentary groups are prepared to make changes to the bill during the parliamentary process,” she said, declining to comment on whether she and her party comrades will vote for the bill in the Parliament. “I assume the representatives will evaluate the bill once we know it’s final form.”

Petteri Orpo, the chairperson of the National Coalition, said the Left Alliance must choose its side in the dispute.

“They’re on two different lanes here. On the one hand they’re trying to please nurses but at the same time they’re in the government and responsible for making sure nothing harmful happens to patients in Finland. Now is the time for them to figure out where they stand,” he said.