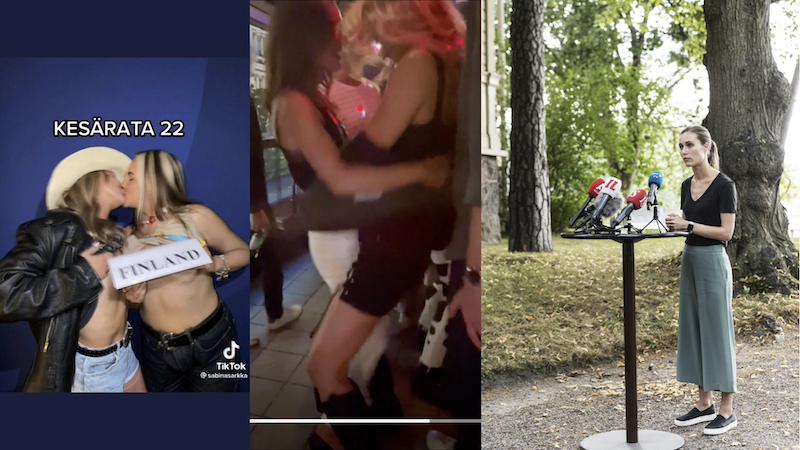 Just a day after the video leaks of Finland’s young prime minister partying at private apartments and snuggling up with Finnish singer and actor Olavi Uusivirta in a Helsinki night club, she had to apologise for new images posted on TikTok.

One of the women is covering her bare breasts with the sign “Finland” which is usually used to indicate participants of a meeting.
Another video published by a tabloid yesterday shows the prime minister dancing - hips locked and knees interlaced - with ms. Särkkä in a Helsinki nigh club at the early hours of Sunday 7th of August, the night after the private party videos were shot.
The image is part of a video titled “Kesärata 22”, where singer, songwriter Alma is improvising a rap about “boobs.” The video was later removed from the TikTok account of Särkkä.

“I saw the image this morning. Yes the images are shot in the official residence (Kesäranta) on the Sunday after (the music festival) Ruisrock. I had friends over. We swam and went to the sauna and spent time in the yard. The images are apparently taken in the downstairs bathroom which was available to guests”, said Marin. “In my opinion the image is not appropriate and shouldn’t have been taken”

Last year, it turned out that Marin had used state funds to order “breakfast” and cold meals for herself and her family on daily basis. The so called breakfast allowance which was originally meant for occasional use, when the prime minister and guests would stay in the residence was according to commentators stretched too far. The benefit was also not mentioned in the prime minister’s tax reports, Marin later apologised and returned some of the used benefits; the sum of €14 000 to taxpayers.