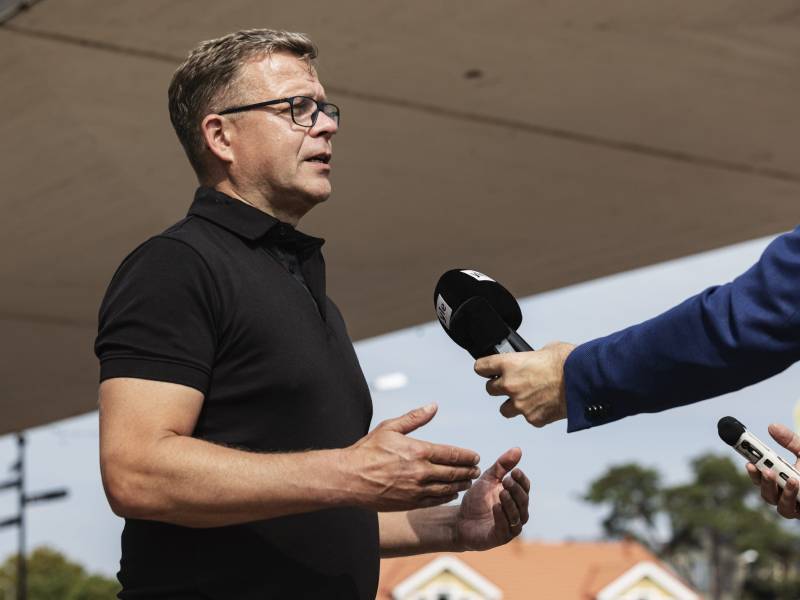 Petteri Orpo, the chairperson of the National Coalition, spoke to reporters ahead of the opposition party’s summer convention in Mariehamn, Åland, on Tuesday, 16 August 2022. Helsingin Sanomat’s new poll indicates that the party would win 23 per cent of the vote if the parliamentary elections were held today. (Roni Rekomaa – Lehtikuva)

THE NATIONAL COALITION sits at the top of the latest opinion poll by Helsingin Sanomat.

The newspaper revealed this morning that support for the right-wing opposition party decreased by 0.9 percentage points from the previous poll to 23.0 per cent, leaving it with a 2.9-point advantage over the Social Democrats.

The opposition party has lost some of the supporters it won over in the aftermath of its successful municipal election campaign last year.

“Although the National Coalition is still clearly the most well supported party, it’s currently leaning more heavily on support from people who voted for it in the municipal elections than a month ago,” Sakari Nurmela, the managing director of Kantar Public, commented to Helsingin Sanomat.

Support for the Social Democrats continued on its stable, slightly upward trajectory by creeping up by 0.2 points to 20.1 per cent.

“The change from the previous month is very minor even though the party did get across to the right side of a kind of a psychological barrier as its popularity rose to over 20 per cent,” analysed Nurmela.

The Finns Party saw its popularity increase by 1.3 points to 16.0 per cent. Nurmela estimated that the populist right-wing opposition party has managed to canvass support among voters after taking a step back in the polls during the Nato debate.

“Over the past month, people who abstained from voting in the municipal elections have voiced their support for the Finns Party,” he said.

The three parties are well separated from other political parties in Finland.

Support for the Centre fell by 0.6 points to 11.0 per cent as some of its former supporters continue to shun it in favour of the National Coalition. The number of former supporters monitoring the situation from the sidelines has similarly increased, according to Nurmela.

The Christian Democrats saw its popularity slip by 0.2 points to 3.4 per cent.

Kantar Public interviewed 2,586 people for the poll between 18 June and 12 August. Slightly more than one-third (34%) of the people contacted were unable or unwilling to disclose which party would receive their vote if the parliamentary elections were held now.

The poll results have a margin of error of +/-2.1 points as far as the largest parties are concerned.