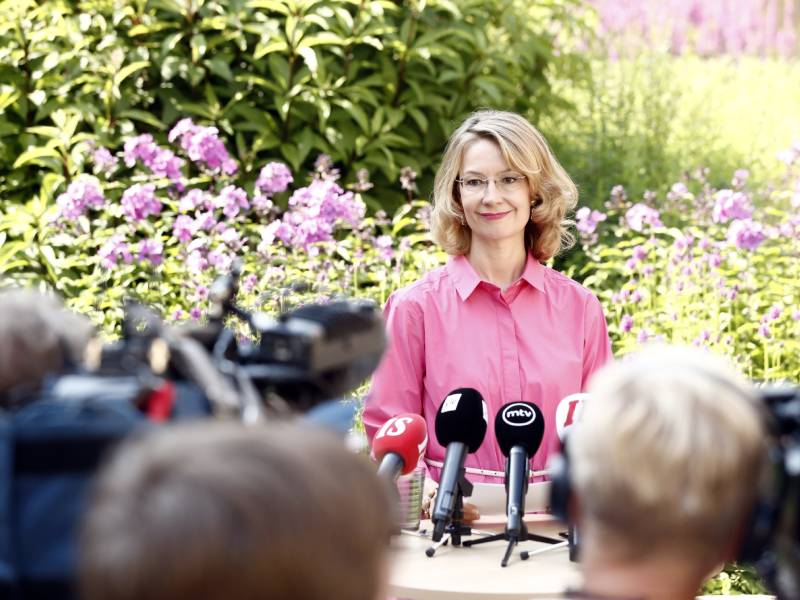 Minister for European Affairs and Ownership Steering Tytti Tuppurainen (SDP) talked to the media about the 15-billion-euro agreement to stabilise Uniper, a Düsseldorf-based subsidiary of Finland’s Fortum, in Helsinki on Friday. (Roni Rekomaa – Lehtikuva)

“The key was to find an agreement that all parties could accept and that safeguards European, and thus also Finnish, security of energy supply,” she commented at a press conference on Friday.

The German state will take a 30-per-cent equity stake in the ailing energy company by subscribing about 157 million new shares at a nominal value of 1.7 euros per share. Germany also pledged to make available up to 7.7 billion euros in capital to the company against issuance of mandatory convertible instruments. KfW, a German state-owned investment bank, committed to providing around seven billion euros in liquidity support by raising its existing credit facility from two to nine billion euros.

While Fortum will remain the largest shareholder in Uniper, its stake will fall from 78 to 56 per cent as a result of the package.

Markus Rauramo, the CEO of Fortum, estimated that the rescue package is a major step in re-establishing a stable footing for Uniper and Fortum. Further efforts, though, will be required to establish a long-term sustainable basis for the gas business of Uniper.

Tuppurainen on Friday underscored that agreement fulfils the core objectives of making sure that no taxpayer money is required for the rescue package and Fortum does not have to inject capital into Uniper. It remains a possibility, she conceded, that the ailing company inflicts more costs on taxpayers in future.

“What will happen in the future remains to be seen. We’re still in a difficult situation. We’re by no means in calm waters. On the contrary, Russia continues to wage an energy war against Europe.”

She estimated that a key feature of the agreement is that it limits the risks possibly created by energy-policy decisions in Germany for Fortum. Uniper has had to sell natural gas at prices that are lower than its acquisition prices due to the limited availability of affordable natural gas from Russia. The agreement, however, enables the company to transfer up to 90 per cent of the higher acquisition prices to its customers starting in October.

The German government pledged to cover any losses exceeding seven billion euros arising from the waiting period. The additional financial support will not not reduce the stakes of current owners.

Tuppurainen said Finland considers it important that German consumers start paying more market-based prices for natural gas due to the impact not only on Fortum, but also on the green transition in Europe.

Uniper’s hydropower and nuclear power assets, she also reminded, continue to make the company valuable for Fortum and Finns.

Riikka Purra, the chairperson of the Finns Party, viewed that the agreement signals the partial nationalisation of Uniper.

“How were they able to accept this kind of primacy for German loans?” she asked. “It’d be reasonable to demand that Uniper’s current owners have the opportunity to get their stakes back at these same prices once the acute crisis is over.”