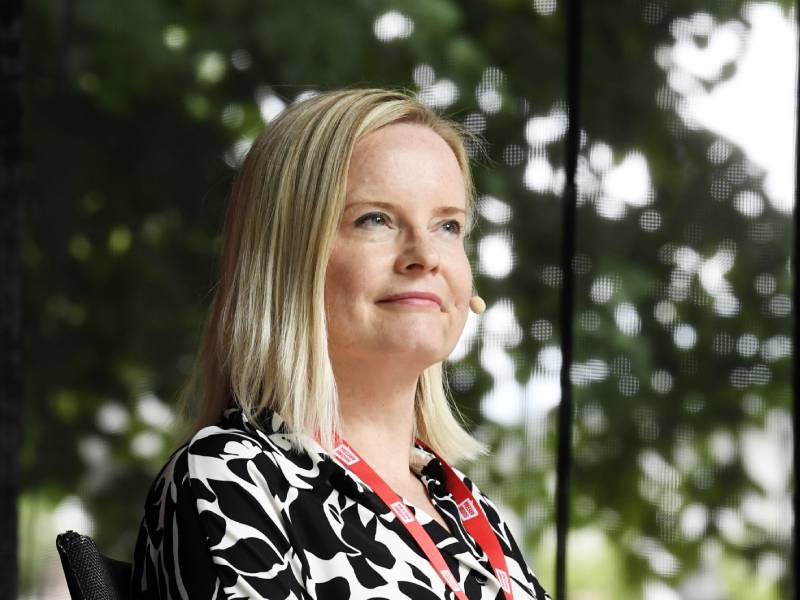 Riikka Purra, the chairperson of the Finns Party, took part in a panel discussion at Suomi-Areena in Pori on 13 July 2022. Purra on Monday said Members of the Parliament should interrupt their summer holidays to weigh up the situation of Uniper, the German subsidiary of of Finland’s Fortum. (Jussi Nukari – Lehtikuva)

NEGOTIATIONS between Finland and Germany about bailing out Uniper, a natural gas-reliant subsidiary of Finland’s Fortum, have continued following the ministerial-level discussions held last week.

“The negotiations are in a very sensitive stage, and I can’t comment on the progress, contents or timetable of the negotiations in any way,” Minister for European Affairs and Ownership Steering Tytti Tuppurainen (SDP) stated to Helsingin Sanomat on Monday.

She added that the situation would be analysed with officials from the ownership steering department later on Monday.

The Finnish government is involved in the negotiations because it holds a 51-per-cent stake in Fortum. Fortum, in turn, holds 78 per cent of shares in Uniper. Bailing out the ailing energy company could thereby cost billions of euros to taxpayers in Finland.

The negotiations are conducted under substantial time constraints. Uniper revealed a roughly fortnight ago that it is incurring daily losses of tens of millions of euros because it has had to acquire natural gas at higher prices from the spot market due to the export restrictions imposed by Russia. Media reports indicate that the company could slide into insolvency within weeks if not days.

Tuppurainen on Monday confirmed that the parties have days or, at most, weeks to come to an agreement on the rescue plan.

“I unfortunately can’t rally comment on anything else, except that we’re trying to find an agreement that’s acceptable to both parties. I’m still sticking to what I said after physically meeting representatives of the German government on Thursday: the agreement must be found preferably in days, at most in weeks,” she said to Helsingin Sanomat.

Tuppurainen will address the Parliament’s Commerce Committee on Tuesday.

Riikka Purra, the chairperson of the Finns Party, on Monday stated that Members of the Parliament should interrupt their summer holidays to weigh up the issue and that cabinet members should present a report on the risks and an estimate of the maximum possible losses associated with Uniper.

“How much will taxpayers have to cough up if all the risks are realised?” she asked in a press release.

The Finnish government, she added, should also clarify what information it utilised to authorise Fortum to grant its eight-billion-euro support facility to Uniper in early 2022, before the Russian invasion of Ukraine.

“Were Uniper’s derivative risks known? And were Fortum’s small shareholders kept informed as required under the limited liability companies act?”

“The support package amounts to over 10 per cent of the total central government budget. This decision marks the opening of the largest tab for using tax money to rescue a single desperate company since the subsidies given to banks in the 1990s,” wrote Purra.