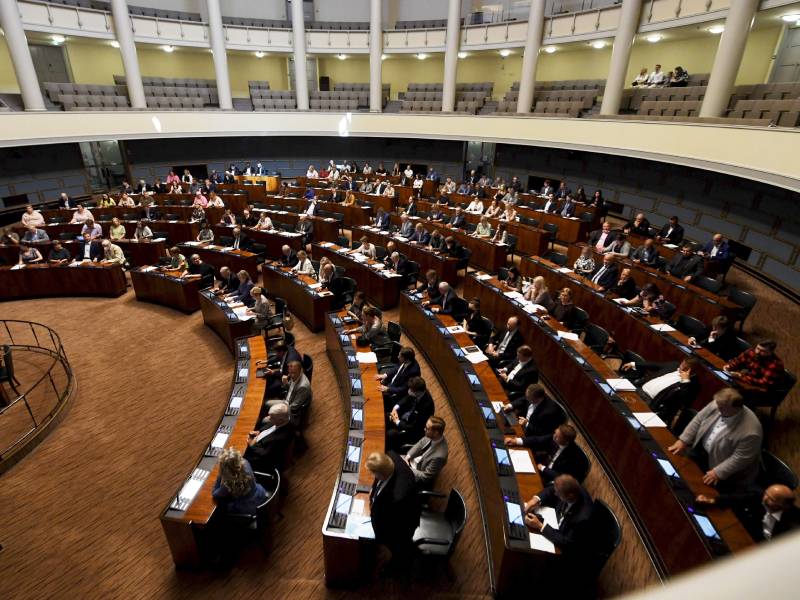 A plenary session was underway at the Finnish Parliament on Monday, 4 July. Most MPs are prepared to join Nato regardless of what happens with Sweden, indicates a survey conducted by YLE. (Vesa Moilanen – Lehtikuva)

MOST MEMBERS of the Finnish Parliament view that Finland should join Nato even if Sweden could not do so at the same time, indicates a survey carried out by YLE.

The Finnish public broadcasting company reported yesterday that 72 of the 111 lawmakers surveyed viewed that the government should move forward with the accession regardless of the situation in Sweden.

Willingness to move forward alone was high particularly among the largest opposition parties – the Finns Party and National Coalition. Many who thought so, though, viewed that ideally the two countries join the defence alliance hand in hand.

Thirty lawmakers, by contrast, stated that the neighbouring countries should join the defence alliance hand in hand. Nine of the respondents were unable or unwilling to disclose their opinion on the issue.

Many of the lawmakers who expressed their willingness to move forward alone justified their view with the long land border between Finland and Russia.

Timo Heinonen (NCP) stressed that Finland should under no circumstances make its national security conditional on Sweden acceding to Nato or on Sweden’s “left-wing leadership wavering from its decision” to pursue membership in Nato.

“If we’re faced with the situation where, for example, Turkey only ratified Finland’s membership, we’d naturally move forward rather than slow down at the expense of our security,” wrote Sari Sarkomaa (NCP).

Juha Pylväs, the chairperson of the Centre Parliamentary Group, viewed that Finland and Sweden applying for the membership simultaneously remains the starting point. “It’d give a really bad impression if Finland started making moves solo as soon as it was faced with adversity,” he commented.

The survey was carried out primarily before the Nato summit in Madrid, Spain, on 28–30 June. Finland, Sweden and Turkey signed a trilateral memorandum after nearly four hours of talks on the first day of the summit that made it possible to grant invitee status to Finland and Sweden. Turkey, though, has continued to air its reservations about the membership bids and threaten to slow down the ratification process.

Pundits have viewed that its demands and allegations have been directed especially at Sweden.

Canada, Denmark and Norway on Tuesday became the first three countries to ratify the Finnish and Swedish bids to join Nato. Estonia is expected to do the same on Wednesday.

The membership applications must be ratified by all 30 member states of Nato.