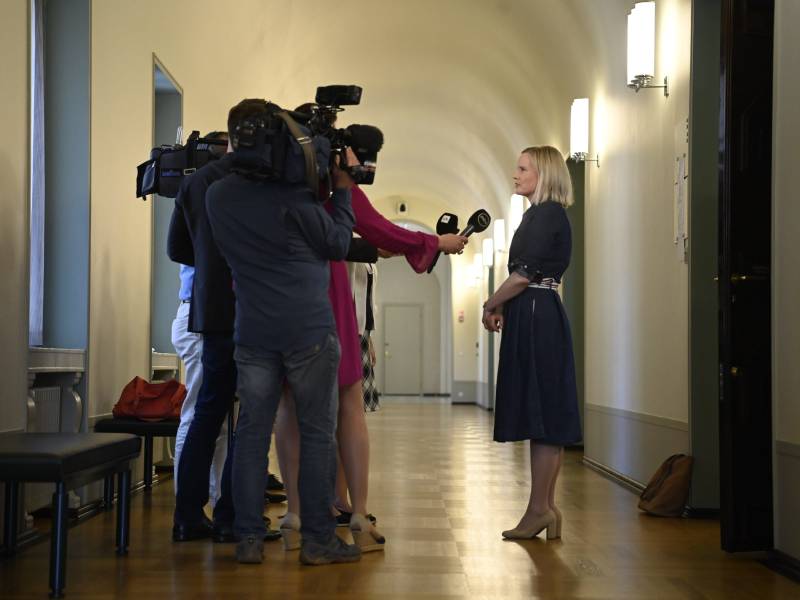 Riikka Purra (PS), the chairperson of the Administration Committee, lauded the report as a “major win” for the security of Finland. (Antti Aimo-Koivisto – Lehtikuva)

THE ADMINISTRATION COMMITTEE of the Finnish Parliament finalised its report on amending the border guard act late on Thursday, reports Helsingin Sanomat.

Although the meeting went on effectively for the entire day due to long-standing differences between parties on whether or not it should be possible to shut down the eastern border in the event of a hybrid campaign, the report was ultimately approved unanimously.

The Finns Party and National Coalition both lauded the outcome as a major victory, saying they succeeded in introducing revisions to the government bill that enable shutting down the border for asylum applicants in the event of a hostile campaign against Finland.

The Finnish Parliament is to vote on the bill next week.

“This was a major win for the security of our country,” rejoiced Riikka Purra (PS), the chairperson of the Parliament’s Administration Committee. “As the original government bill would have been powerless to prevent hostile hybrid campaigns, we had to stand firm.”

Heikki Vestman (NCP) viewed that the decision marks the finish line for the opposition party’s long-running effort to introduce provisions to the act that can counter hostile campaigns by foreign states.

The decision was also welcomed by Eveliina Heinäluoma (SDP).

“The most relevant thing is that, if necessary, it will be possible to shut down the border and centralise the receipt of applications in a location that does not have to be situated on a land border,” she said, indicating that in certain circumstances asylum applications could only be received at, for example, Helsinki Airport.

The committee was fundamentally tasked with striking a balance between the right to seek asylum, which is protected under international agreements, and national capabilities to respond to hybrid campaigns in border regions.

The government stated in its original bill that it should be possible to centralise the receipt of asylum applications in a single location in extraordinary circumstances. Opposition parties, however, were concerned about its actual ability to shut down the border because the bill also stated that if a person expresses their desire to apply for asylum despite physical obstacles and orders from border officials, their case should be processed.

The Administration Committee concluded that the bill should be supplemented with a section stating that asylum applications could be filed only at a border-crossing point that is open.

Opposition parties had also voiced their concern about whether border officials would be able to turn away asylum applicants who seek to cross the border outside an open border-crossing point, according to Helsingin Sanomat.

Vestman estimated that also these concerns were addressed.

“According to the report, border officials could prevent illegal crossing of the land border by means of physical force in the event of a hybrid operation – also when the attempts to cross the border are peaceful,” he tweeted yesterday evening. “This means that the border can shut down also factually.”