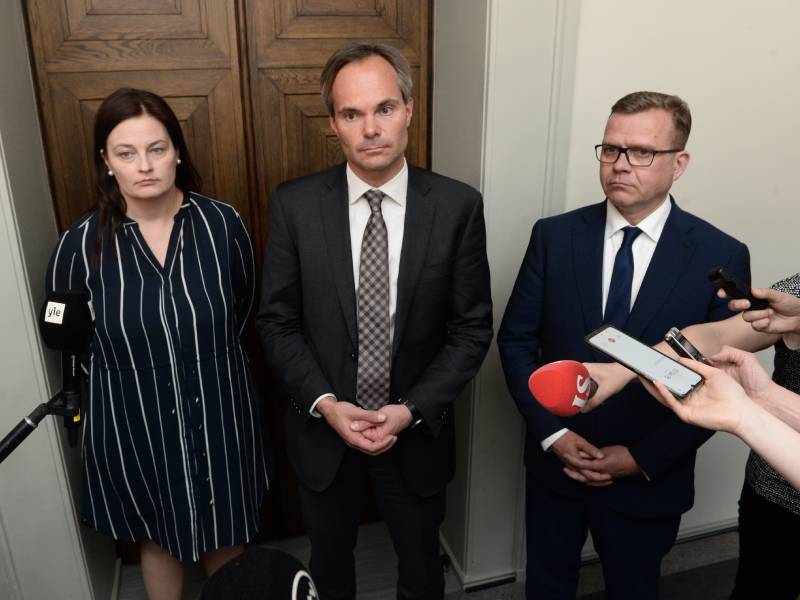 Kristiina Kokko (left), Kai Mykkänen and Petteri Orpo of the National Coalition on Tuesday spoke to reporters about the accusations made against Wille Rydman (NCP), a 36-year-old second-term Member of the Parliament. (Mikko Stig – Lehtikuva)

“He left things untold that we naturally all now see are relevant to this case. None of us in the parliamentary group have had the impression that we’re talking about a large case involving several people,” Kai Mykkänen, the chairperson of the National Coalition Parliamentary Group, stated on Tuesday.

“It’s absolutely obvious that the limits of appropriate conduct have been breached and offensively so.”

The parliamentary group concluded unanimously that the lawmaker no longer enjoys its support. It appears that restoring the confidence will be unlikely: Mykkänen said the issue can be re-examined in the event that the group determines that new facts have emerged and restored confidence in Rydman.

“But it’s a process. We’re not tying it strictly on what the police does. The police is looking into criminal liability, not proper conduct or trustworthiness,” he told.

The party deemed the explanations satisfactory.

It later learnt that the accusations had been investigated also by the National Bureau of Investigation (KRP). The investigation, though, resulted in no follow-up action.

Orpo on Tuesday reiterated that the scope of the accusations came as a complete surprise to the party. “When we read Helsingin Sanomat on Sunday morning, it took this to a whole other level. We had no knowledge of anything like this.”

Kokko viewed similarly that the party had no possibilities to look into the case more thoroughly prior to the article. “You have to be able to trust the word of an MP,” she stressed.

Issues such as this, she added, should be dealt with by the police rather than the party.

“When it’s known that we’re talking about very young people, our clear line has been that police should be the instance that should be contacted in all matters like this. The authority definitely has the power and possibility to investigate such serious claims,” said Kokko.

Rydman announced earlier yesterday he will temporarily relinquish his membership in the National Coalition Parliamentary Group. He will consequently also step down as a member of the Parliament’s Constitutional Law Committee and as a deputy member of the Administration Committee.

He made the announcement after a discussion with Mykkänen and Orpo. Orpo indicated in the press conference that he has continued to deny the allegations made against him.

“His own view is probably found best in what he has written as his own view,” commented Orpo.