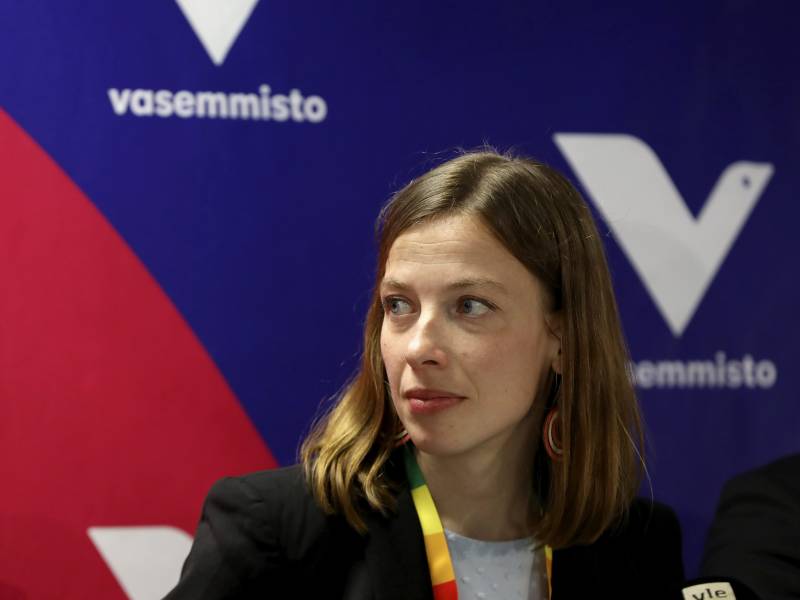 Li Andersson, the chairperson of the Left Alliance, spoke to reporters at a press conference held in conjunction with the party conference of the ruling left-wing party in Pori on Sunday, 12 June 2022. (Jussi Partanen – STR / Lehtikuva)

THE NATO STANCE of the Left Alliance shifted noticeably at its party conference in Pori on Sunday.

“Nato membership is a massive change in the foreign policy line of Finland. It also increases political and military tensions. The Left Alliance believes Finland should stress that its Nato membership will be defence-oriented and that it will not host any nuclear weapons, permanent Nato bases or permanent Nato troops,” the newly adopted stance reads.

The stance signals a stark change for the ruling left-wing party, despite its vague formulation; the membership is deemed essentially as a foregone conclusion rather than something to oppose or support.

Chairperson Li Andersson viewed that the decision will allow the party to put to bed its internal debate about whether or not to apply for the membership.

The sensitive articulation also drew praise from many attendees for successfully representing the majority of the party members regardless of their personal views on the membership, according to the daily newspaper.

“It did pretty well at taking into account the party’s diversity when it comes to this question,” said Veronika Honkasalo, a first-term Member of the Finnish Parliament from Helsinki. “The shake-up this has caused has been the biggest for our party, but so far we’ve done well. There wasn’t any discordant debate, not even at the evening event.”

The Left Alliance’s newly adopted policy programme states that the party should advocate foreign and security policy that is in line with its objectives, such as world peace and nuclear disarmament, in the Nato-era Finland.

The party conference also lent its support for the objective of removing the terrorist classification of the Kurdistan Workers’ Party (PKK) at the EU. Presented by the Left Youth, the initiative was initially to be discussed separately, but it popped up surprisingly during the discussion on the policy objectives.

The programme also states that the party will strive to support the sovereignty of Kurds and halt all arms trade with Turkey.

The Left Youth justified its initiative by arguing that the terrorist classification does not take into account recent changes in the political situation in the Middle East. The PKK, it reminded, was classified as a terrorist organisation by the now 27-country bloc two decades ago, but the party has since engaged in peace negotiations with Turkey and actively participated in campaigns against the so-called Islamic State.

The Left Alliance continues to condemn terrorism in all its forms, Andersson stressed on Sunday.

Andersson was elected for her third and final term at the helm of the party in Pori on Saturday. Honkasalo, in turn, was elected as the party’s first deputy chairperson.