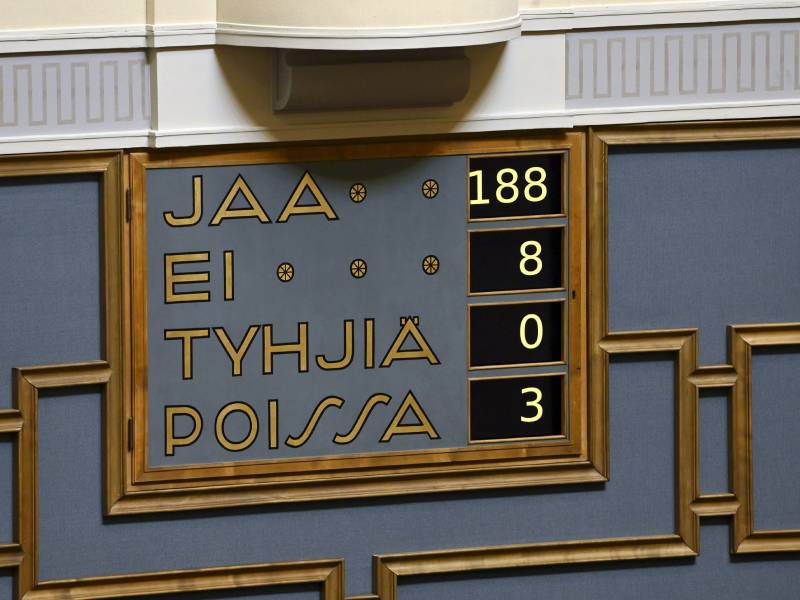 A voting board shows the clear-cut results of a highly anticipated vote on Nato in the session hall of the Finnish Parliament in Helsinki on Tuesday, 17 May 2022. As many as 188 lawmakers voted for and only 8 against applying for membership in the defence alliance with full rights and obligations. (Antti Aimo-Koivisto – Lehtikuva)

MEMBERS of the Finnish Parliament on Tuesday voted overwhelmingly in favour of Finland applying for membership in Nato.

The Parliament’s Foreign Affairs Committee’s unanimous proposal to seek membership in the defence alliance was supported by 188 and opposed by 8 lawmakers. Only three lawmakers were absent from the plenary session, and not a single lawmaker cast a blank vote.

Six of the eight nay-votes were cast by members of the Left Alliance.

“The Parliament has given its firm support to the government to pursue Finnish membership in Nato,” tweeted Prime Minister Sanna Marin (SDP). “The stable and long-standing consensus-seeking approach to foreign and security policy carries on also today.”

“The outcome couldn’t really have been clearer in a democracy like Finland,” Minister of Defence Antti Kaikkonen (Centre) stated to Iltalehti.

The Parliament’s Foreign Affairs Committee stated in its report that Finland should apply for the membership with full rights and obligations instead of imposing any boundary conditions for its membership.

The committee did stipulate, though, that the government must keep the parliament informed of any developments in the application process.

The final decision to declare interest in initiating the membership negotiations was made after the parliamentary session, in a meeting that began shortly before 6pm, by President Sauli Niinistö. Niinistö attended the meeting via a remote connection from Sweden, where he was making his first state visit since the beginning of his first term in 2012.

The letter to be sent to the defence alliance was then signed by Minister for Foreign Affairs Pekka Haavisto (Greens). Haavisto told STT earlier yesterday that the letter would be submitted to the headquarters of Nato in Brussels on Wednesday by Klaus Korhonen, the head of the Finnish mission to Nato.

Also the minister admitted to being surprised at the extent of support for the proposal to apply to join Nato.