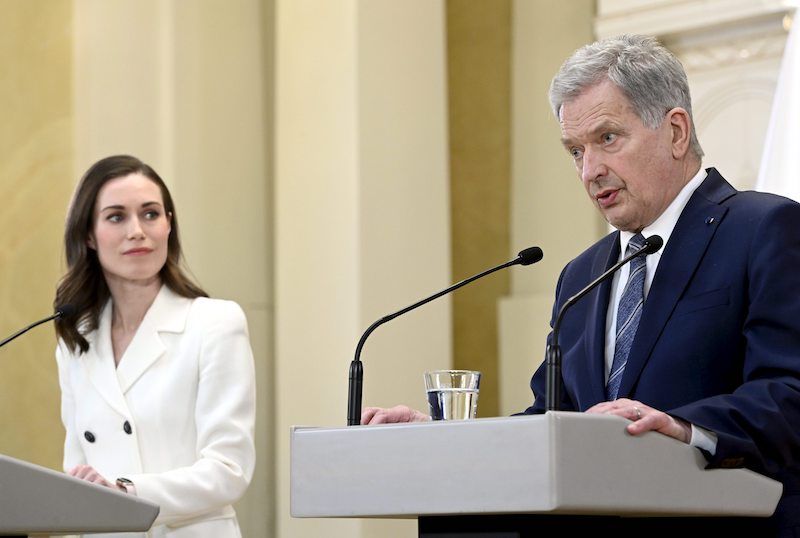 President Niinistö after the NATO decision: A new era is opening – the result will be a protected Finland that is part of a stable, strong and responsible Nordic region

On Sunday, 15 May 2022, the President of the Republic of Finland and the Ministerial Committee on Foreign and Security Policy decided that after consulting Parliament, Finland will apply for membership in the North Atlantic Treaty Organization (NATO).

After the meeting of the President and Ministerial Committee, President of the Republic of Finland Sauli Niinistö and Prime Minister Sanna Marin held a joint press conference at the Presidential Palace.

“A lot has happened. This is a historic day. A new era is opening. I would like to draw particular attention to how democracy has worked in Finland. I am referring to Finnish people and their opinions, political parties, the Government and Parliament. Together they have demonstrated the force of democracy”, President Niinistö said at the beginning of the press conference.

At the press conference, President Niinistö stressed Finland’s right to make its own decisions concerning national security. “The result will be a protected Finland that is part of a stable, strong and responsible Nordic region. We will both receive protection and help protect others in the Baltic region and the entire North Atlantic Treaty Organization.”

President Niinistö also pointed out that security is not a zero-sum game. “When we improve and maximise Finland’s security, it is not away from anyone else – it will improve comprehensive security.”

President Niinistö commented on cooperation between Finland and Sweden by quoting an old Swedish saying, ‘Finland’s cause is ours.’ Now Finland can equally well say that Sweden’s cause is ours, he noted.

In response to questions from journalists, President Niinistö explained his phone conversation with President Putin as calm and said that he did not get any threats, even though President Putin said Finlands decision to join NATO is a mistake, because Finland has not been under threat. Niinistö also mentioned his conversation with President of Turkey a month ago, in which Erdogan had been supportive of Finlands NATO application. "I am confused" Niinistö told reporters, referring to Erdogan's recent statement opposing Finlands and Swedens membership because "..these nordic countries harbour terrorists." Both Finland and Sweden have a sizeable Kurdish community, mostly consisting of resettlement refugees brought to these countries from Iran, Iraq and Turkey. Many of these now citizens of Finland and Sweden are politically active and some support political parties such as PKK, which fight for a Kurdish independent state.

Office of the President