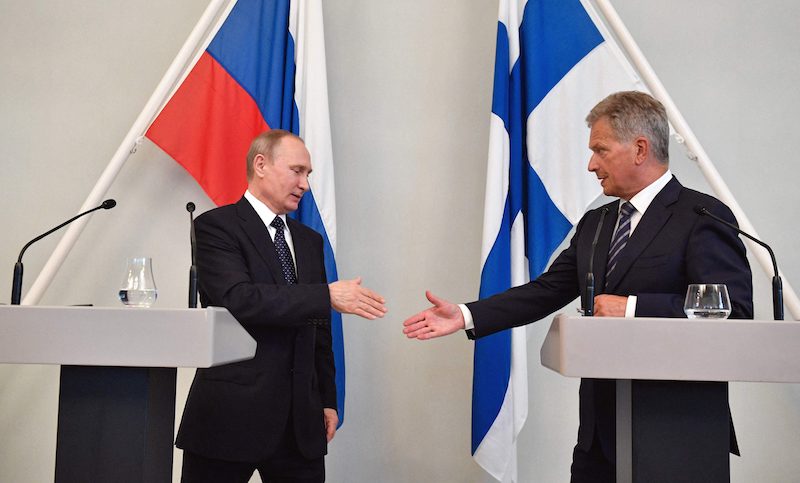 This file photo taken on July 27, 2017 shows Finland's President Sauli Niinisto (R) and Russian President Vladimir Putin shaking hands after a press conference in Punkaharju hotel in Savonlinna, Finland. - Finnish President Sauli Niinisto spoke with his Russian counterpart Vladimir Putin on May 14, 2022 regarding the Nordic country's application for NATO membership, which is expected to be officially announced this weekend, his office said. LEHTIKUVA / AFP

In a statement released by the office of the President of Finland today, also tweeted by President Niinistö himself, Finland’s president describes his phone conversation with the Russian President Vladimir Putin. The statement says:

“President of the Republic of Finland Sauli Niinistö had a phone call with President of Russia Vladimir Putin on Saturday, 14 May 2022.

President Niinistö told President Putin how fundamentally the Russian demands in late 2021 aiming at preventing countries from joining NATO and Russia’s massive invasion of Ukraine in February 2022 have altered the security environment of Finland. President Niinistö announced that Finland decides to seek NATO membership in the next few days.

President Niinistö noted that he had told President Putin already in their first meeting in 2012 that every independent nation maximises its security. This is what is happening now, too. By joining NATO Finland strengthens its own security and assumes its responsibility. It is not away from anyone else. Also in the future, Finland wants to take care of the practical questions arising from being a neighbour of Russia in a correct and professional manner.

“The conversation was direct and straight-forward and it was conducted without aggravations. Avoiding tensions was considered important”, President Niinistö says.

President Niinistö repeated his deep concern over the human suffering caused by the war Russia wages in Ukraine. President Niinistö stressed the imperative of peace. He also conveyed the messages on securing the evacuation of civilians delivered earlier in the same week by President Volodymyr Zelenskyy.

The phone call was initiated by Finland.”

There is no mention of President Putins reaction or comments in the statement.