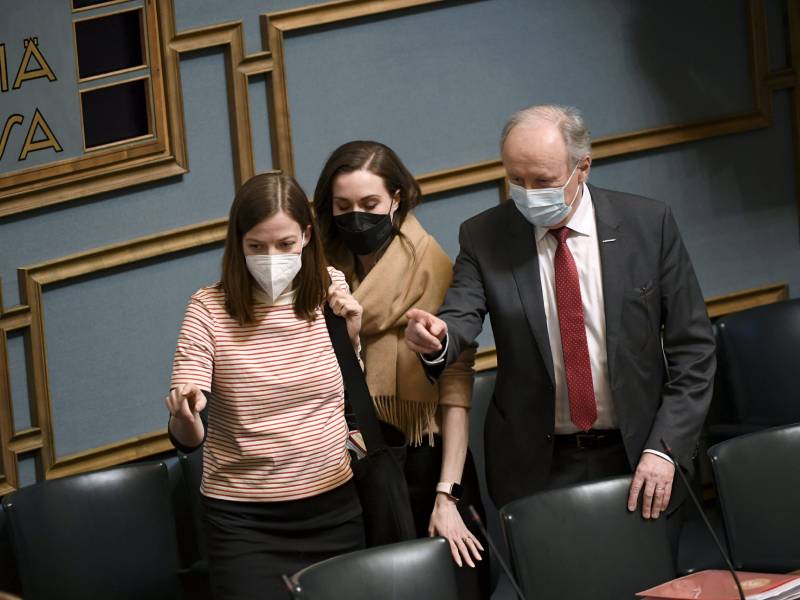 Ministers Li Andersson (left), Sanna Marin and Aki Lindén took their seats ahead of a question-time debate in the Finnish Parliament on 7 April 2022. (Jussi Nukari – Lehtikuva)

MINISTER of Family Affairs and Social Services Aki Lindén (SDP) on Tuesday revealed he has changed his mind about presenting a proposal for a new patient safety act to the government on Wednesday, reports Helsingin Sanomat.

The act would enable health care authorities to obligate nurses to work in circumstances where the health and lives of patients were deemed to be at serious risk due to, for example, industrial action.

Lindén explained his change of heart by pointing to news that the ongoing nursing strike will be suspended for Easter. He indicated that he is prepared to submit the proposal after the holidays if the strike continues to pose a threat to patient safety – even if the government remains divided over the issue.

Although he assured that his decision was unaffected by any kind of political pressure, the decision was interpreted as political. Prime Minister Sanna Marin (SDP), for example, has expressed her serious reservations about the proposal, saying she would find it “very distasteful” to present it to the government.

Lindén also said the decision to withdraw the proposal was unaffected by opposition from nursing unions and its possible ramifications for efforts to settle the labour dispute. Hopefully, he added, a settlement to the labour dispute is found before the strike expands to seven additional hospital districts.

If the strike expands according to plan after Easter, it should be targeted in a way that does not affect functions vital to the health and lives of patients, pleaded Lindén.

He stated earlier that, despite opposition from the ranks of the government, his ministerial responsibilities obligate him to move forward with the legislative proposal given expert assessments that the strike is severely undermining patient safety.

The labour dispute is linked to nursing unions’ demands for higher wages and measures to address the labour shortage in the sector. Unless a settlement is found, the strike is set to expand to cover a total of 13 hospital districts and 35,000 nurses as of Wednesday, 20 April.

Industrial action has already spread to the municipal sector, with a strike shutting down schools and daycare centres in Kuopio and Tampere on Tuesday and Wednesday.