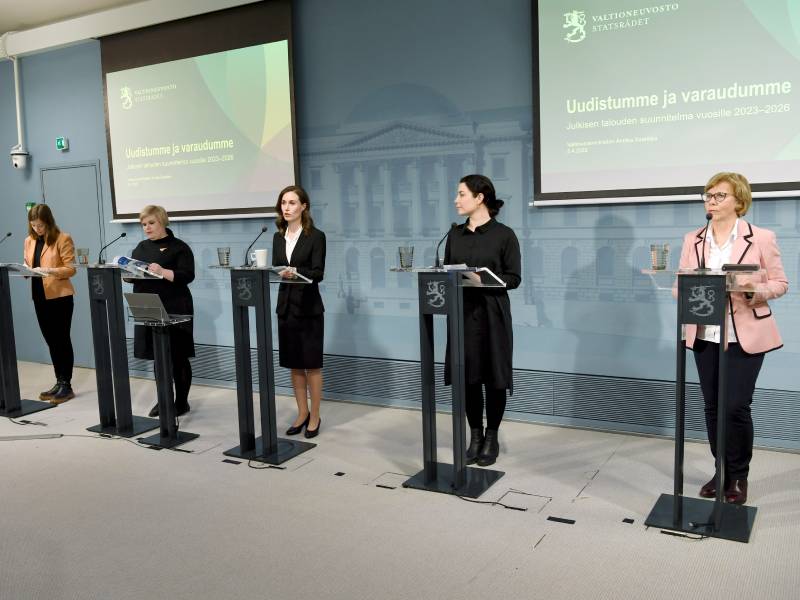 Representatives of Finland’s ruling quintet announced the outcomes of their budget negotiations in a news conference in the Government Palace in Helsinki on Tuesday, 5 April 2022. (Antti Aimo-Koivisto – Lehtikuva)

THE FINNISH GOVERNMENT is calling for significant increases in public spending in the coming years due to the war in Ukraine.

Prime Minister Sanna Marin (SDP) on Tuesday stated in a news conference that the decisions made in the framework session are an attempt to support sustainable economic growth and respond to needs arising from the war of aggression waged in Ukraine by Russia.

“The government has decided on significant investments in military national defence, border security and cybersecurity. We’ll also do everything that’s needed to help the people coming here from Ukraine,” she summarised.

The decisions represent a departure of about two billion euros from the framework the government had imposed on itself. The borrowing required by the spending increases will lead to the deficit in public finances fluctuating between 6.7 and 7.6 million euros in the coming years.

Minister of Finance Annika Saarikko (Centre) reminded that the national economy is currently laden with the adverse effects of both the coronavirus pandemic and the war in Ukraine. The effects of the war, she gauged, will be long-standing and can exacerbate the economic situation further particularly if energy imports from Russia are banned by Finland or the EU.

The government decided to earmark an additional 130–200 million euros a year for the operational costs and a total of 1.5 billion euros for the materiel procurements of the Finnish Defence Forces for 2023–2026.

The decision is in line with the funding request presented by the Finnish Defence Forces and Ministry of Defence.

The Finnish Border Guard will be granted 163 million euros for the acquisition of surveillance aircraft due to the changing security environment and over 115 million euros in additional funding for necessary costs between 2022 and 2026. It will also receive a share of the investments made to beef up cybersecurity capabilities.

Minister of Justice Anna-Maja Henriksson (SFP) revealed that around 780 million euros will be set aside for next year for costs arising from the refugee crisis triggered by the war in Ukraine. The funding bump is based on the assumption that the war will result in the filing of 60,000 temporary protection and 6,000 asylum applications in Finland in 2022.

“About 16,000 Ukrainian nationals have sought international protection in Finland after the attack by Russia,” she told.

“By the end of June, the government will evaluate the additional decisions and legislative amendments needed to guarantee services for people covered by temporary protection and requirements for the right to home municipality,” she said.

The government announced it will raise social security benefits tied to the national pension index, such as the national and guarantee pension, unemployment security, basic income allowance and student financial aid, to respond to the concerns of low-income households in the inflationary environment.

Soaring energy prices have been the primary driver of inflation, pushing up the cost of not only housing and mobility but also, indirectly, other commodities. In February, consumer prices were roughly 4.5 per cent higher than one year earlier.

“Preliminary estimates suggest that, for example, the gross amount of labour market subsidy and basic income allowance could rise by 20–30 euros as a result of this index-based increase,” said Minister of Education Li Andersson (LA).

Andersson also expressed her satisfaction with the decision to raise basic funding for vocational education by 50 million euros as of next year, saying it enables the hiring of vocational instructors and teachers on a permanent basis.

The government also called off the 350-million-euro cut in research funding it had announced a year ago and agreed to introduce a tax incentive worth about 100 million euros to encourage companies to undertake research projects as of next year.