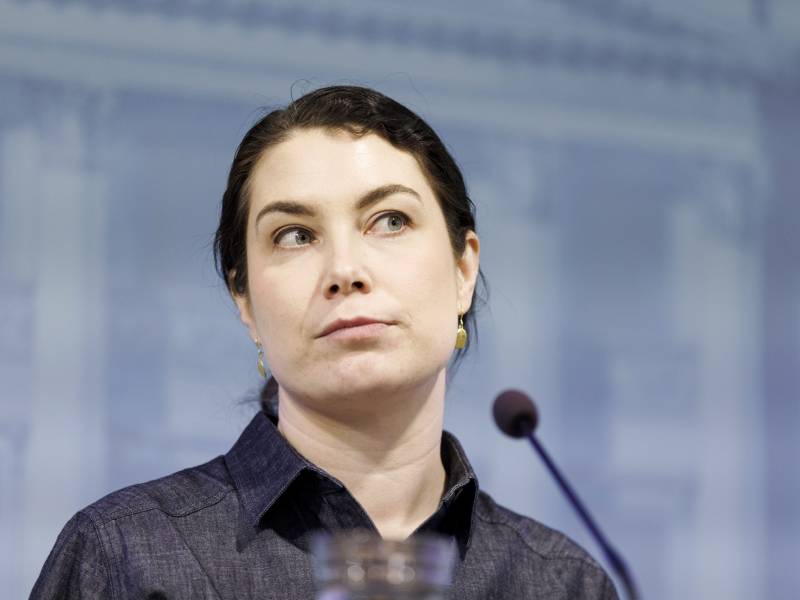 Minister of Climate Change and the Environment Emma Kari (Greens) spoke about the government’s plan to meet its emission reduction goals in the effort-sharing sector in Helsinki on Friday, 18 March 2022. (Seppo Samuli – Lehtikuva)

THE FINNISH government has supplemented its climate actions in order to generate 5.7 megatonnes of carbon dioxide equivalents in emission reductions and meet the reduction target in the effort-sharing sectors set by the European Commission.

“With these decisions, we are on path towards a carbon-neutral Finland by 2035,” Minister of the Environment and Climate Change Emma Kari (Greens) declared on Friday.

“The crisis in Europe has shown that the direction of Finland’s climate policy has been the right one: building a fossil-free welfare state is also part of security policy. Speeding up the green transition is increasingly important. Clean domestic solutions bring work and well-being to Finland and reduce our dependence on fossil fuels.”

The government last week agreed on concrete measures that should reduce emissions by 0.2 megatonnes of carbon dioxide, 0.8 megatonnes less than has been deemed necessary by the Finnish Climate Change Panel. The reductions are to be achieved in agriculture by means such as adopting a national climate food programme, addressing food waste, and promoting agroforestry, wet agriculture, organic agriculture and the use of environment-friendly feed.

An entirely new measure is a loan guarantee scheme for household loans for clean acquisitions, such as geothermal heating or zero-emission vehicles.

The government will also adopt a resolution that sets an emissions reduction target for public procurement operations.

Kari on Friday said the decisions are founded on the estimates of research organisations that the credibility of the medium-term climate policy plan should be enhanced in four areas: The plan had an underlying deficit of 0.1–0.2 megatonnes, assumed that actions in the land-use sector would overachieve, relied on an EU-wide emissions trading system to halve transport emissions and was overly optimistic about the reductions generated with cross-sectoral measures.

While she argued that the decisions will strengthen the credibility of efforts to achieve carbon neutrality by 2035, the decisions were met with scepticism by Markku Ollikainen, the chairperson of the Finnish Climate Change Panel.

“Some individual measures were strengthened, but this isn’t particularly convincing,” he commented to Helsingin Sanomat on Friday. “It’s difficult to see how the one million tonnes of carbon dioxide [reductions] that we think the government should’ve decided on can be achieved with these decisions.”

The measures in agriculture were similarly met with some reservations.

“I’m sure there are some decisions that can create reductions. For example, promoting paludiculture and climate-friendly feed. When it comes to food programmes, you could say that they create emission reductions if agricultural policy supports it,” said Ollikainen.

Achieving the emissions reductions, he stressed, would require that the government refrain from slowing down the natural transition of consumers toward more plant-based diets with policy decisions that support meat production.

Ollikainen added that a core problem of the effort is that the medium-term climate policy plan is but one element of the national climate strategy, which is intertwined with, for example, the plan for the land-use sector. As the government chose to make fewer decisions through the medium-term climate policy plan, it will have to overachieve with measures linked to land use – a prospect that seems unlikely.

He also lauded the decision to continue preparing the national emissions trading scheme for road transport, saying it will serve as a mechanism that enables the ramping up of climate actions if necessary after 2025.