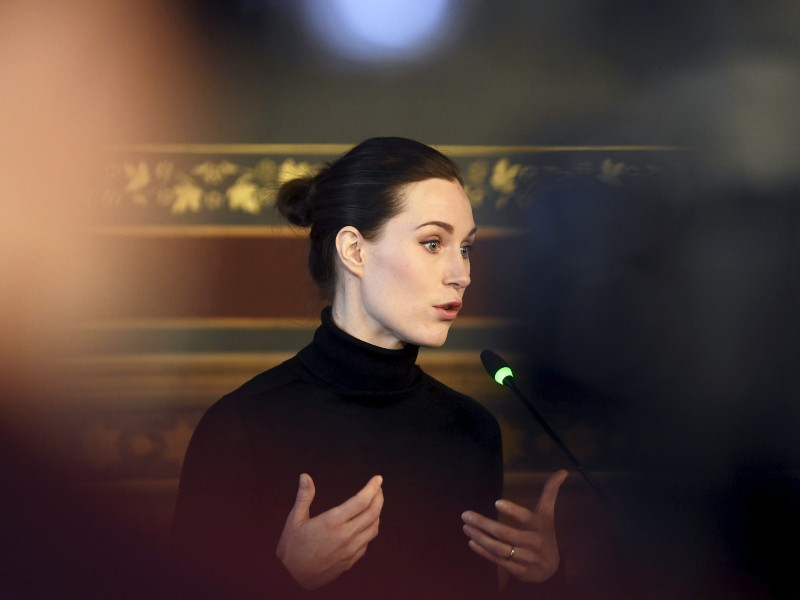 Prime Minister Sanna Marin (SDP) spoke to political journalists in the House of the Estates in Helsinki on Wednesday, 9 March 2022. (Vesa Moilanen – Lehtikuva)

PRIME MINISTER Sanna Marin (SDP) on Wednesday said Finland will not set aside the discussion about its possible membership in Nato.

Marin stressed that the discussion should take place at several levels with a view to establishing a national consensus: political parties, for example, must be given ample time and space to engage in broad-based discussions in order to formulate or update their position on the issue.

“I’d say that we’ll have this discussion in Finland this spring – [a discussion about] how we’ll approach the change in the security policy environment and what sort of conclusions it’ll necessitate from us,” she outlined at an event organised for political journalists in Helsinki.

“I don’t want to adopt any particular stance in advance or define the outcomes or conclusions – or even the turns of phrase – of the report that we’ll be presenting to the Parliament,” she added, referring to an upcoming government report dealing with not only the foreign and security policy, but also the economic and security of supply ramifications of the crisis in Ukraine.

“The report will be presented rather quickly to the Parliament. Our aim is that it’ll be ready in weeks rather than months.”

Swedish Prime Minister Magdalena Andersson on Wednesday rejected calls from the opposition to consider joining the defence alliance in light of the war in Ukraine, estimating that a membership application could destabilise the security situation in Europe.

Marin assured that Finland will thoroughly examine the effects of both applying and not applying for the membership, including on the possibilities to bring an end to the war. The country also has special reasons for not shying away from the discussion, one being its over 1,300-kilometre long border with Russia.

“This is hardly the only issue on the world’s agenda at this moment,” she reminded. “I understand that this is getting a great deal of attention here, but there are a lot of other things on the world’s mind besides the possible Nato memberships of Finland and Sweden.”

Finland, she pointed out, has to also weigh up a number of other critical questions, such as the security of food and energy supply, in the wake of the Russian invasion of Ukraine.

“Things as simple as how can we make sure people’s homes can be heated and there’s food in shops. All of these are things that we’ll have to solve now so that we don’t end up in trouble later.”

Both Finland and the EU as a whole must shake off their energy dependence on Russia as soon as possible, according to Marin.

While the US on Tuesday declared that it is banning oil, coal and liquefied natural gas imports from Russia, the EU has yet to take quite as decisive steps due to its much greater reliance on Russian energy. The European Commission announced it would switch to alternative oil and gas suppliers and expand the clean energy sector with the goal of making the 27-country bloc independent of Russian fossil fuels, starting with gas, “well before 2030”. Demand for Russian gas from the EU could consequently fall by two-thirds by the end of 2022, according to the commission.

“Even in these circumstances, energy is being imported from Russia to the EU,” noted Marin. “At the same time, it’s worth keeping in mind that this is funding Russia’s warfare.”

The prime minister confirmed that peat will be one of the fuels used to bolster the security of energy supply in Finland in the short term.