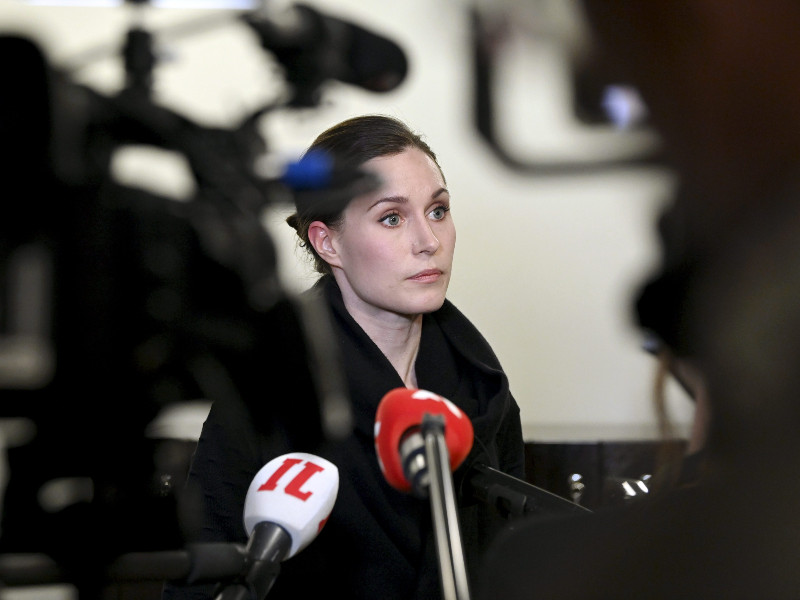 Prime Minister Sanna Marin (SDP) spoke to the media about newly concluded parliamentary discussions about the Russian invasion of Ukraine and the security policy situation of Finland. (Markku Ulander – Lehtikuva)

PRIME MINISTER Sanna Marin (SDP) stated on YLE A-studio on Tuesday that Finland intends to shake off its energy dependence on Russia.

“As soon as possible, that’s the intention,” she declared, highlighting that the transformation is underway across Europe. “In Germany, we’re already seeing a shift in views and decisions being made on Nord Stream 2. They’re now investing firmly in [liquefied natural gas] terminals.”

She also confirmed that the government is not moving forward with the nuclear power project of Fennovoima, a consortium that is in the minority ownership of Russian state-owned Rosatom.

Minister of Economic Affairs Mika Lintilä (Centre) remarked at the end of last week that he, as the minister responsible for the permit procedures related to the project, cannot fathom a scenario where the project could be presented to the government for approval.

Marin on Tuesday also revealed that the recent change in the security environment has made many political parties ready to engage in a more official discussion about Nato.

“I think it’s very noteworthy that citizens are now looking for answers,” she said to the public broadcaster. “We don’t have a rulebook ready for how the process will play out. Today we formally looked into whether there’s a willingness to have the official discussions. Such a willingness does exist.”

A citizens’ initiative calling for a referendum on the membership has received over 75,000 statements of support since its launch on 21 February. Any initiative that receives a minimum of 50,000 statements of support in six months can be submitted to the Finnish Parliament. YLE reported at the start of the week that the majority of the public are in favour of joining the defence alliance, according to a survey carried out between 23 and 25 February.

Marin stressed to Helsingin Sanomat on Tuesday that citizens’ initiatives will be processed accordingly, but they are not instruments of foreign and security-policy making in Finland. While it is clear that the discussion on the membership issue will continue, it has yet been decided when and how, according to her.

“We’ll evaluate what’d be the right way and procedure to have the discussion in as calm, deliberate and organised a way as possible while evaluating what’s the most rational path forward from the viewpoint of Finland’s security,” she said.

“This was the common view.”

The Finnish Parliament convened yesterday evening to examine the change in the security situation caused by Russia’s attack on Ukraine.

“We recognised together that the security policy situation has changed substantially after Russia attacked Ukraine. This is a fact we must recognise,” the premier said. “We didn’t make any final decisions on the processes or anything else [but] simply reviewed the operational picture and assessment.”

Marin estimated that it could be possible to, for example, consider updating or supplementing the reports that define the foreign and security policy, including the official position on Nato. Finland has insisted on holding on to the option of joining the defence alliance.