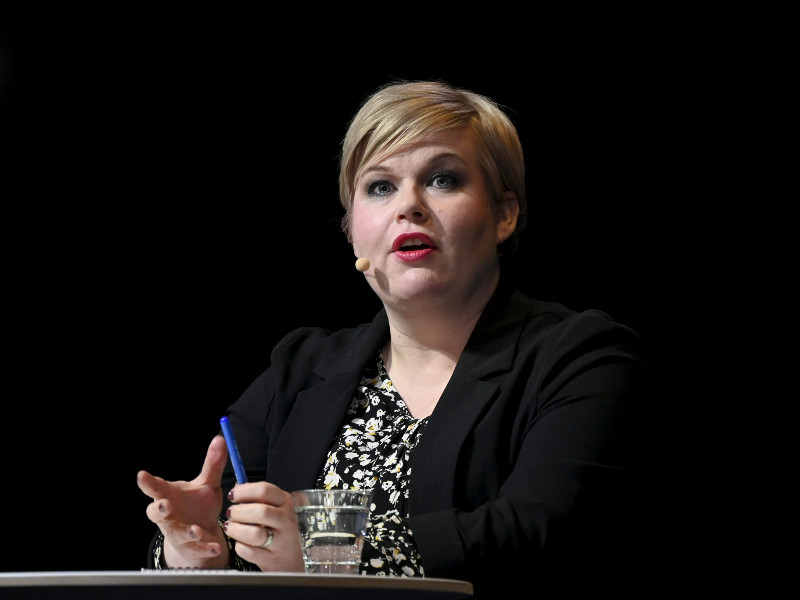 Annika Saarikko, the chairperson of the Centre Party, reacted during an election debate organised by Helsingin Sanomat in Helsinki on Wednesday, 19 January 2022. YLE’s latest poll indicates that the ruling party has made significant gains in the past month and has a chance to emerge as the second largest party from the county elections held on Sunday, 23 January. (Emmi Korhonen – Lehtikuva)

THE CENTRE and the Finns Party were the biggest movers in the latest county-election poll commissioned by YLE.

Support for the Centre has surged by 2.4 percentage points to 17.7 per cent since the previous poll conducted the public broadcasting company between November and December. Support for the Finns Party, by contrast, has plummeted by 3.3 points to 14.3 per cent.

The National Coalition remains in pole rather comfortably with an approval rating of 22.4 per cent as parties enter the home stretch of campaigning before the elections held on Sunday, 23 January. The Social Democratic Party saw its popularity dip by 0.9 points to 18.0 per cent, possibly setting the scene for an intense battle for second place between it and the Centre.

“Really the only and fairly clear change here is that support has risen clearly for the Centre and fallen for the Finns Party,” summarised Tuomo Turja, the research director at Taloustutkimus.

The Centre, he gauged, owes its resurgence to its successful efforts to win back voters who in the most recent elections backed the Finns Party.

The Finns Party appears to be faced with the same challenge that has hindered it in municipal elections: how to rally voters to head to polling stations?

“According to our underlying data, the Finns Party’s supporters are probably the most reluctant out of all large parties to head to the polling stations. Maybe that’s an indication that the county elections aren’t elections where [the party] is at its strongest,” analysed Turja.

Roughly two-thirds (2,083) of the 3,158 people interviewed for the poll disclosed their party of preference for the county elections, a share that aligns with the polls conducted before other elections. Taloustutkimus conducted the poll between 27 December and 18 January.

“But on the other hand, there are no indications of the phenomenon that’s often seen as the elections approach that the share of people disclosing their position rises clearly. This poll doesn’t provide any indications of that and also that could point to the theory that the county elections haven’t at least got people tremendously excited,” he said.

Support for the Left Alliance was unchanged at 8.1 per cent, giving the party a slight edge over the Green League (7.4%), which has seen its popularity slip by 0.2 points since December. The Swedish People’s Party and Christian Democrats gained 1.1 and 0.4 points to rise to 5.0 and 3.4 per cent, respectively, whereas Movement Now dropped 0.2 points to 1.8 per cent.

Both the Centre and Green League are clearly affected, the former positively and the latter negatively, by the fact that no votes will be cast in Helsinki.

More than a million voters cast their votes in the county elections in advance, according to the Ministry of Justice.