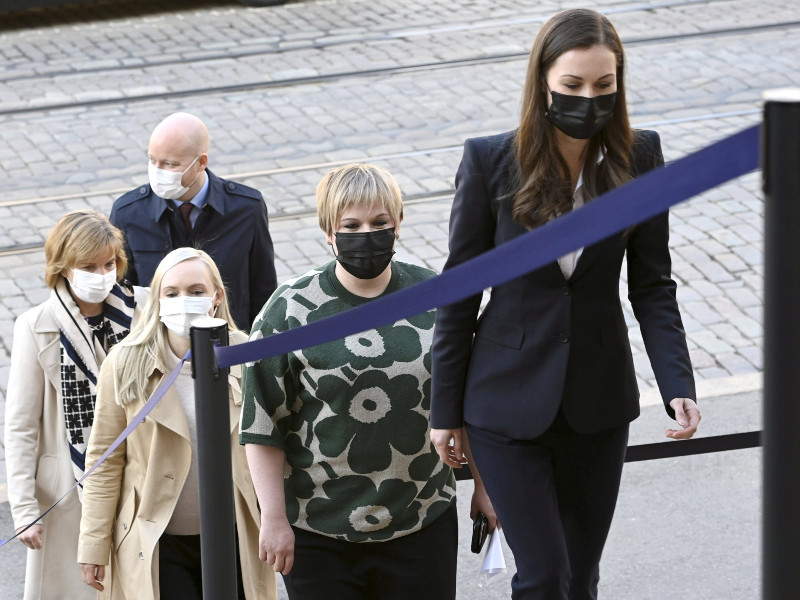 Prime Minister Sanna Marin (SDP) led her fellow cabinet members on the steps of the House of the Estates in Helsinki on 21 April 2021. (Heikki Saukkomaa – Lehtikuva)

THE GOVERNMENT of Prime Minister Sanna Marin (SDP) is losing popularity among the public, indicates a survey commissioned by Helsingin Sanomat.

Slightly fewer than half (48%) of the respondents estimated that the government has performed its responsibilities relatively or very well, representing a decline of 23 percentage points from June 2020.

Helsingin Sanomat gauged that the factors explaining the decline may include the bickering between the ruling parties, differences of view that have surfaced due to the proximity of the first-ever county elections and the negative publicity received by Marin.

Although the prime minister remains the most popular member of her cabinet, with 53 per cent viewing that she has fared fairly or very well, also her approval rating has dropped significantly from the 80 per cent measured in mid-2020. The share of respondents who are unimpressed with her efforts stands currently at 25 per cent.

Only two other prime ministers have received the backing of more than half of respondents in previous editions of the survey: Juha Sipilä (Centre) in June 2015 and Jyrki Katainen (NCP) in December 2012.

Minister for Foreign Affairs Pekka Haavisto (Greens) and Minister of Education Li Andersson (LA) were deemed to have performed their duties well by 46 and 38 per cent of the respondents, respectively.

More than 1,000 people were interviewed for the survey between 30 November and 11 December by Kantar TNS.