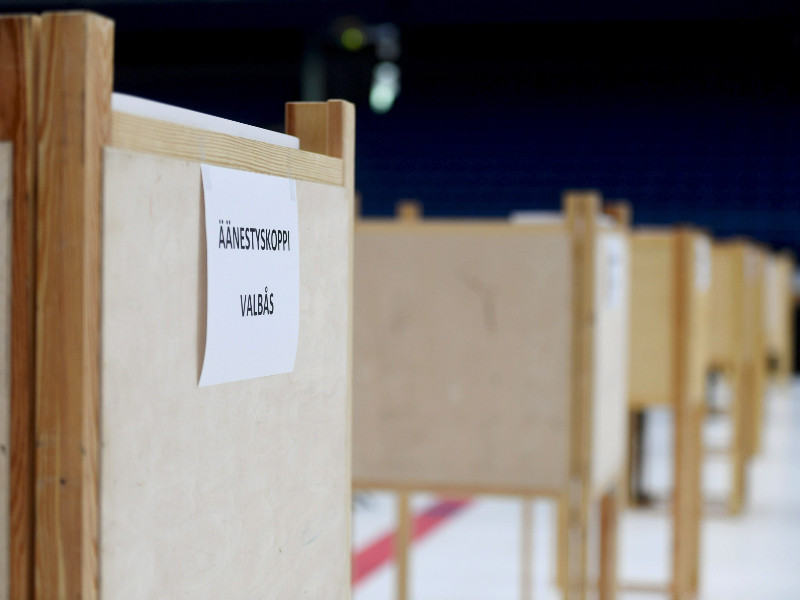 Booths inside a polling station in Espoo on 27 May 2021. (Silja-Riikka Seppälä – Lehtikuva)

THE NATIONAL COALITION is in pole position ahead of the first county elections to be organised in Finland on 23 January, indicates a poll commissioned by YLE.

The right-wing opposition party, the poll found, would be the choice of 21.8 per cent of voters if the elections were held today, securing it a comfortable lead over the Social Democratic Party (18.9%) and the Finns Party (17.6%).

The elections will determine the composition of the councils of the 21 self-governing counties established in the social and health care reform, which was approved by the Finnish Parliament in June. The counties will assume responsibility for organising social, health care and rescue services on 1 January 2023.

YLE on Tuesday revealed the Centre Party is projected to win 15.3 per cent of the ballot. The Left Alliance (8.1%) is to outperform the Green League (7.6%) partly because no votes will be cast in the traditional stronghold of the Greens, Helsinki. The Finnish capital was designated as an exemption in the reform and will continue organising its own social, health care and rescue services.

Support for the Swedish People’s Party stood at 3.9 per cent, the Christian Democrats at 3.0 per cent and Movement Now at 2.0 per cent.

Tuomo Turja, the research director at Taloustutkimus, gauged that the poll results bode well for the National Coalition and Social Democrats.

“[The National Coalition] is the clear number one in this poll, and it has loyal supporters. The National Coalition can probably be confident about getting this level of support in the elections, which is something you can’t say about all the parties,” he commented to the public broadcasting company.

The Finns Party, for example, struggled to mobilise its supporters in the municipal elections held earlier this year, falling over three percentage points short of pre-election polls with a vote share of 14.5 per cent.

The Social Democratic Party has traditionally performed well in municipal elections and has drawn attention to the number of social and health care workers on its candidate list.

“These are new elections and to some extent we’re in uncharted waters. The Social Democrats is a strong municipal election party and its popularity hovering around 18 per cent isn’t a surprise. The party is well supported in the provinces,” noted Turja.

The nature of the election is likely to create some confusion also among voters, he viewed. Many will therefore likely make their choices based on the impressions parties have left in national politics.

“It’s still a bit unclear to citizens what exactly is being decided and there hasn’t been too much campaigning yet either.”

Taloustutkimus interviewed over 2,100 people for the poll between November and December.

The Foundation for Municipal Development in December published a survey indicating that voter turnout in the county elections is at risk of falling below 40 per cent, with only 41 per cent of the respondents saying they would definitely vote.