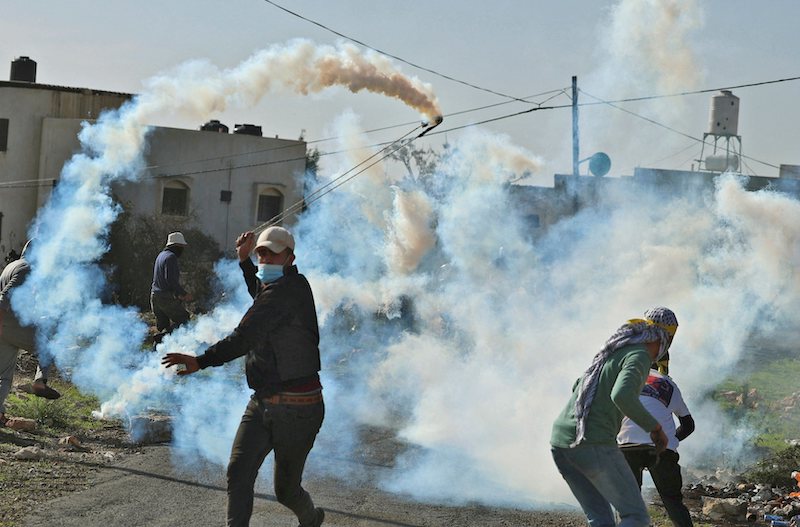 Palestinian protester uses a slingshot to return tear gas canisters amid clashes with Israeli security forces in the village of Kfar Qaddum near the Jewish settlement of Kedumim in the occupied West Bank on December 10, 2021, during a protest against the expropriation of land by Israel. LEHTIKUVA / AFP

Member of the Finnish Parliament, Veronika Honkasalo (Left Alliance, Finland), has introduced a legislative motion to ban the import of goods originating from certain occupied regions. The scope of the proposed act would cover the occupation exercised by the state of Israel and the Israeli settlements in Palestinian territory that are in violation of international law.

- Import bans that are explicit and established by law can help businesses and consumers make responsible choices. Palestinians are suffering from the longest occupation in modern history and Israeli policies that systematically breach international law and violate human rights. We must stop supporting the illegal Israeli settlements, Ms. Honkasalo states.

The motion proposes a ban on the import of goods from regions where occupying powers practice serious violations of international humanitarian law or human rights agreements. The aim is to prevent enabling business activities that may directly or indirectly provide the means for such violations. A list of regions that comply with the criteria would be issued through a Government Decree, based on the framework provided by the proposed act.

- The most blatant examples include cases where the homes of people living in the region are demolished and the residents deported or forcibly removed to make way for illegal settlements by the occupying power. This violates international law, the approval of the international community and the self-determination rights of the peoples in the area.

Ms. Honkasalo gathers signatures from the MPs of Finland for the motion until 1 February 2022.