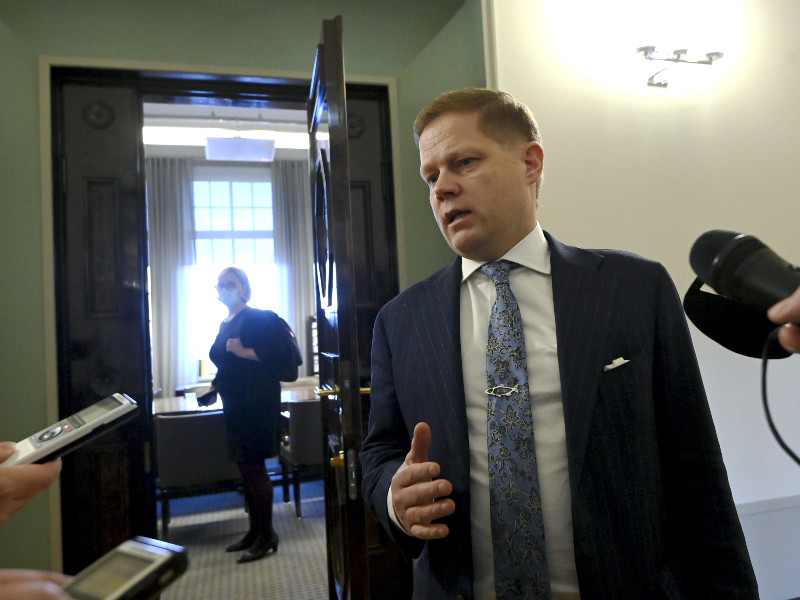 Markus Lohi, the chairperson of the Parliament’s Social Affairs and Health Committee, spoke to reporters in the Parliament House on Tuesday, 12 October 2021. (Markku Ulander – Lehtikuva)

THE FINNISH PARLIAMENT on Tuesday approved the contents of a bill for implementing the co-called coronavirus pass, after an hours-long debate about both the pass and entry restrictions consisting of more than a hundred statements from lawmakers.

A final vote on the bill is scheduled for Friday.

Markus Lohi (Centre), the chairperson of the Parliament’s Social Affairs and Health Committee, announced in a press conference earlier yesterday the committee is proposing that the draft bill presented by the government be amended by raising the lower age limit from 12 to 16 years. All 16–17-year-olds, as well as people who cannot get vaccinated for medical reasons, be guaranteed access to free testing in the public sector in the event that the pass is adopted.

He estimated that the proposal will receive the backing of lawmakers on Friday, allowing the pass to be introduced on Saturday.

The parliamentary debate was rather convoluted on Tuesday. The Finns Party submitted a proposal to shelve the matter until the plenary session taking place today, having long viewed that the pass is unnecessary in circumstances where the vaccination coverage is close to 80 per cent. The Social Democrats responded with a counter-proposal stating that the bill be considered without delay, with its proposal receiving the requisite support.

The proposal to shelve the matter was made by Mika Niikko (PS).

“The Social Affairs and Health Committee’s chairperson wasn’t present and wasn’t expected to show up, not to mention that also the minister was absent. We wanted to move the debate so that the minister had the time to show up,” he explained the rationale to STT.

The government has outlined that the pass should be used only in situations where restrictions are in effect, as a requirement for attending cultural events and entering sports facilities, for example. It is to become available to people who have been fully vaccinated against the coronavirus, recovered recently from the coronavirus disease or tested negative for the virus.

The pass could presently be utilised mostly by nightclubs in areas where the serving of alcohol must end by midnight. A nightclub requiring that its customers are in possession of the pass would be allowed to stay open later into the night.

Gyms, concerts and sporting events, for example, are not allowed to demanding the pass from their customers or attendees as long as they remain outside the scope of restrictions. If regional authorities decided to restrict the use of such venues, the operators could circumvent the restrictions by adopting the pass.

Lohi on Tuesday stressed that the possible introduction of the pass should not be misconstrued as a licence to levy restrictions on looser grounds.