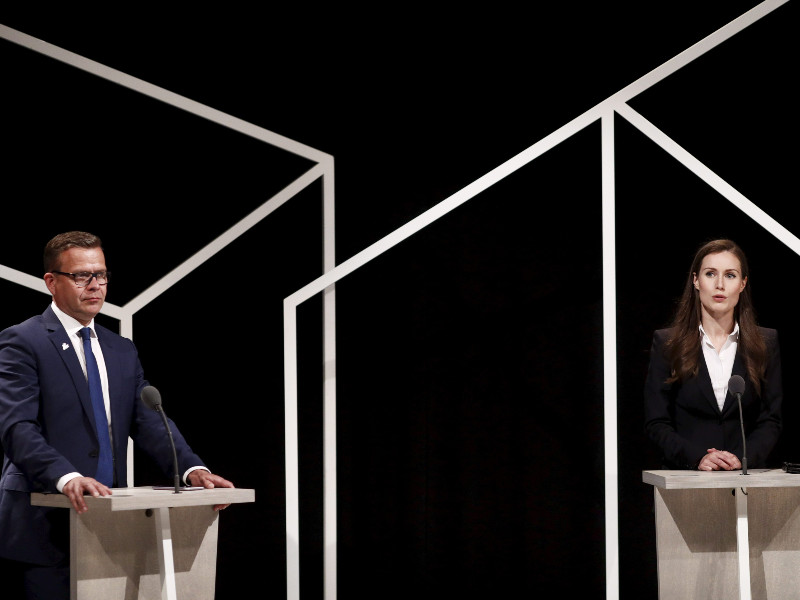 Petteri Orpo of the National Coalition (left) and Sanna Marin of the Social Democrats were photographed during the municipal election show of YLE in Helsinki on 13 June 2021. (Roni Rekomaa – Lehtikuva)

THE CHANGING of seasons has brought no dramatic changes to the approval ratings of political parties in Finland, reveals an opinion poll commissioned by YLE.

The National Coalition held on to its status as the most well supported party in the country despite seeing its popularity slip by 0.4 percentage points to 20.9 per cent in September. Support for the Social Democrats contrastively increased by 0.6 points to 19.3 per cent.

Tuomo Turja, the research director at Taloustutkimus, told YLE that the poll results continue to reflect the municipal election success of the National Coalition.

“The National Coalition has held a clear lead in the aftermath of the municipal elections in all political polls. It’s noteworthy that the situation has been relatively stable already for three months in a row, at least as far as the top parties are concerned,” he commented to the public broadcasting company.

Support for the Finns Party crept up by 0.1 points to 17.7 per cent, providing further evidence that its supporters are unperturbed by its recent change in leadership. The Centre Party, meanwhile, saw its popularity rise by 0.4 points to 12.6 per cent.

The Green League and Left Alliance recorded the biggest swings in popularity, the former dropping by one point to 10.4 per cent and the latter rising by a point to 8.6 per cent. The Green League, the polling data indicates, has haemorrhaged support especially to parties at the left end of the political spectrum.

“The Greens are clearly leaking support to the Left Alliance. The leakage is greater than in earlier polls also toward the Social Democrats,” noted Turja.

The Green League last week selected Iiris Suomela, a first-term Member of the Finnish Parliament for Pirkanmaa, to take over for the duration of the maternity leave of chairperson Maria Ohisalo.

The three smallest parties by popular support all saw their popularity dwindle in September. The Swedish People’s Party dropped from 4.4 to 4.1 per cent, the Christian Democrats from 3.3 to 3.2 per cent and Movement Now from 2.5 to 1.7 per cent.

Taloustutkimus interviewed 2,538 people for the poll between 1 September and 5 October.