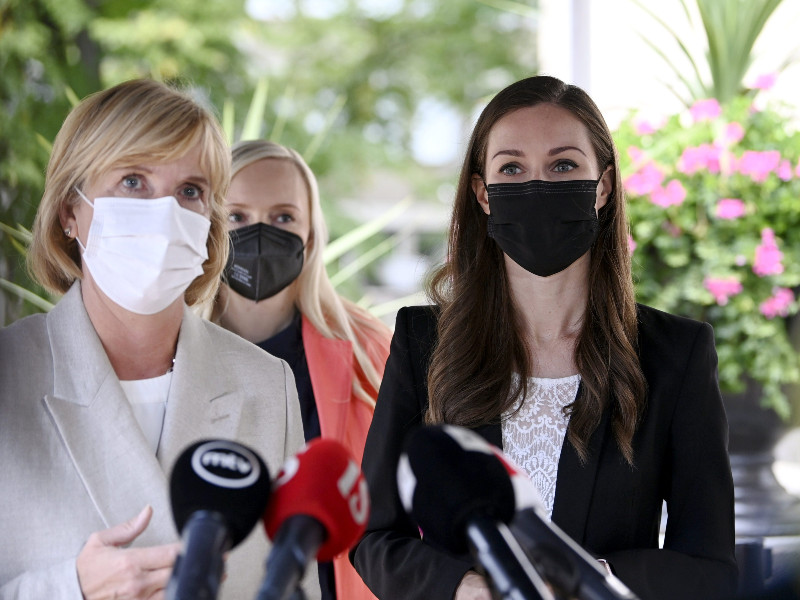 Ministers Anna-Maja Henriksson (left), Maria Ohisalo and Sanna Marin commented on the budget negotiations to the media outside the House of the Estates in Helsinki on Tuesday, 7 September 2021. (Emmi Korhonen – Lehtikuva)

THE GOVERNMENT of Prime Minister Sanna Marin (SDP) failed to make significant progress on either climate actions or employment measures at the House of the Estates in Helsinki on Tuesday, reports Helsingin Sanomat.

Both issues are on the agenda of the two-day budget session that began yesterday, but the ruling quintet, as expected, struggled to make progress especially on the climate actions.

The coalition government agreed last spring to find an agreement on the measures to achieve carbon neutrality by 2035, but yesterday it failed to overcome the deep-rooted differences between the Centre and Green League. The employment measures, in turn, are to be part of an electoral term-long effort to strengthen the public economy by 110 million euros, but some of the proposals have been thwarted by the Left Alliance.

The five chairpersons are believed to have voiced their tentative support at least for raising the income limits attached to student financial aid, according to Helsingin Sanomat.

Marin on Tuesday assured that the building blocks for an agreement are in place.

“We’re now talking about whether and when there’s a desire to find the common compromise that allows us to move forward. There are pieces and building blocks for forming a solution,” she commented yesterday evening.

“I’m at this moment confident that we could conclude the session tomorrow, but naturally that remains to be seen.”

Members of the Green League and Social Democrats engaged in an unusual public dispute over the what is actually on the agenda when it comes to the climate actions.

Minister of the Interior Maria Ohisalo wrote on Twitter that emissions reductions are required in agriculture, manufacturing and transport in order to bridge the emissions deficit of 11 million tonnes of carbon-dioxide equivalents.

This prompted a retort from Minister of Transport and Communications Timo Harakka (SDP): “The climate and energy ministers had the measures for the emissions reductions we’ve agreed on as early as last week. We’re now talking only about whether we want to add tax hikes on top of them.”

Harakka was presumably referring to the tax-related solutions discussed within the government, such as increasing the taxation of heat fuels and abolishing the energy-tax rebate for certain fuels used in agriculture.

“Timo, you surely noticed that the work of the ministerial group on climate and energy issues wasn’t exactly unanimous,” responded Minister of Climate and the Environment Krista Mikkonen (Greens). “That’s why the quintet is looking for shared understanding of an impactful emissions cut package today at the House of the Estates.”

The government will resume its talks at 10am on Wednesday.