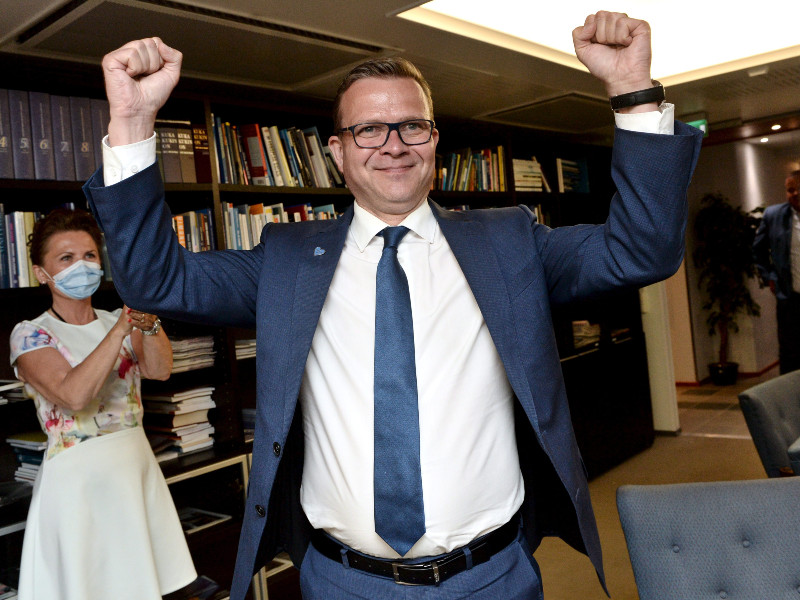 Petteri Orpo, the chairperson of the National Coalition, raised his arms in celebration at his party’s election night party in Helsinki on Sunday, 13 June 2021. (Mikko Stig – Lehtikuva)

THE NATIONAL COALITION has emerged as the undisputed winner of the municipal elections in Finland.

Its victory was even more emphatic than projected by polls in the run-up to the elections, with popular support falling for both the second- and third-placed parties, Social Democrats and the Centre Party. The National Coalition should be delighted particularly with its landslide wins in Helsinki (25.7%), Espoo (36.2%) and Turku (23.2%).

“This is a solid result,” Petteri Orpo, the chairperson of the National Coalition, said to Helsingin Sanomat.

“Our message has got across. The people have given us their strong confidence to take care of affairs in municipalities. The National Coalition is a tougher municipal party than parliamentary party.”

Support for the Social Democrats and Centre Party fell nationwide by 1.7 points to 17.7 per cent and 2.6 points to 14.9 per cent, respectively. While the former has reason to be disappointed with its performance, the latter outperformed at least the most pessimistic projections of a vote haul of less than 12 per cent and maintained its status as the party with the most municipal councillors, with 2,448 seats across Finland.

“If the election results stayed unchanged, it’d beat all expectations,” Annika Saarikko, the chairperson of the Centre, told Helsingin Sanomat.

The Social Democratic Party fended off the National Coalition by a margin of 0.1 points in Tampere, winning 24.3 per cent of the votes case in the almost 240,000-resident city. It emerged as the largest party also in Jyväskylä (19.1%) and, in spite of significant drops, held on to the same status in Lahti (24.9%) and Pori (21.5%).

In both Pori and Jyväskylä, though, it will have the same number of seats as the National Coalition.

“When you lose support, you can’t be satisfied as the chairperson. I’m sure we’ll analyse this result carefully,” commented Sanna Marin, the chairperson of the Social Democrats.

Voter turnout was indeed historically low, with only 55.1 per cent of the people entitled to vote casting a ballot, according to the Ministry of Justice. The turnout represents a decline of 3.8 points from the previous elections and a new low in municipal elections since 1945, when the circumstances were exceptional due to the ongoing Lapland War.

As many as one-third of, or 1.47 million, voters case their vote in advance.

“It was 55.9 per cent in 2000,” said Sami Borg, an election analyst for YLE. “We fell short of even that now. Unfortunately we have loads of large cities where the majority opted not to vote.”

Support for the Left Alliance decreased by 0.9 points to 7.9 per cent and that for the Christian Democrats by 0.5 points to 3.6 per cent. The Swedish People’s Party contrastively saw its vote share creep up by 0.1 points to 5.0 per cent.