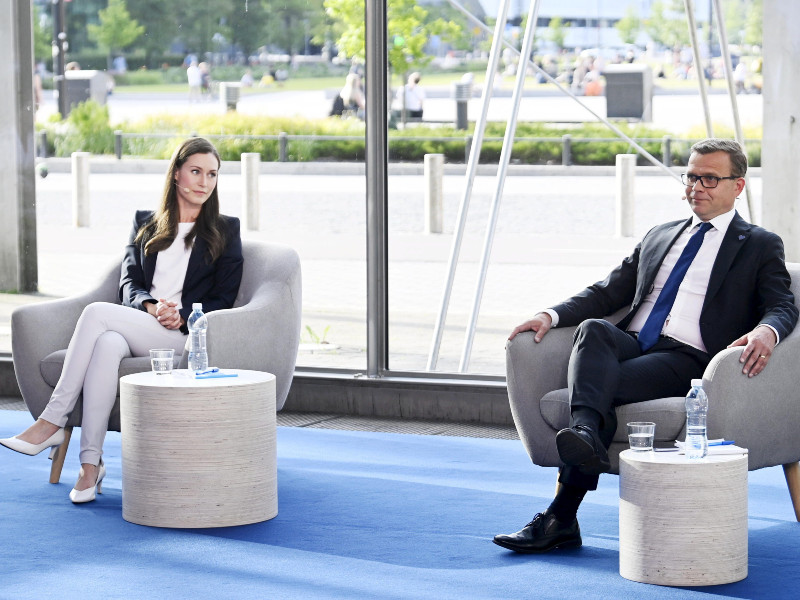 Sanna Marin of the Social Democrats and Petteri Orpo of the National Coalition participated in a municipal election debate hosted by Helsingin Sanomat in Helsinki on Wednesday, 9 June 2021. (Vesa Moilanen – Lehtikuva)

THE NATIONAL COALITION has held on to a clear advantage over other political parties with only a couple of days of campaigning left until the municipal elections on Sunday, 13 June.

YLE on Thursday reported that its final municipal election poll suggests the right-wing opposition party is set to win almost a fifth (19.6%) of the vote, a share that represents a 0.6-percentage-point drop from the previous poll.

Also its two rivals, however, saw their popularity wane in the final stretch of campaigning, according to the poll. The Finns Party fell from 18.2 to 18.0 per cent and the Social Democrats from 18.1 to 17.0 per cent.

Tuomo Turja, the research director at Taloustutkimus, told YLE that relatively low voter certainty remains an issue for the Finns Party. The National Coalition, on the other hand, has benefited from low voter turnout, a fairly typical feature of municipal elections, due to the conscientiousness of its core supporters.

“The Finns Party’s challenge is not so much the other parties, but whether it can get its own supporters to the polling stations,” he said.

The Social Democrats suffered the biggest losses in the poll, losing ground especially in the latter half of the four-week polling period, according to Turja. Although the polling period coincided with the protracted debate over whether breakfast expenses are covered by the allowance of Prime Minister Sanna Marin (SDP), the decline is more likely attributable to the return of issues other than the coronavirus pandemic to the political agenda, viewed Elina Kestilä-Kekkonen, an associate professor of political science at Tampere University.

“It shows the European trend where confidence in the powers to be was exceptionally high during the coronavirus pandemic. Now that the epidemic is losing momentum, the SDP has to step before the public also in regards to other issues,” she explained to YLE.

This return to the political status quo, she pointed out, is evident in that the poll results align closely with the results of the parliamentary elections in 2019.

The Centre appears to have mustered more of a final spurt, registering the largest surge in support – 1.3 points to 13.0 per cent – of all the five ruling parties.

The Green League and Left Alliance both registered minor jumps in support, the former rising from 10.6 to 10.9 per cent and the latter from 8.0 to 8.5 per cent. Support for the Swedish People’s Party contrastively fell by 0.5 points to 4.8 per cent.

The Christian Democrats is projected to win 3.6 and Movement Now 2.1 per cent of the votes, after increases of 0.4 and 0.2 points, respectively.

YLE highlighted in its report that almost a third of people with the right to vote exercised it during the advance voting period, which ended on Tuesday, 8 June.

With Turja and Kestilä-Kekkonen both estimating that voter turnout is unlikely to change dramatically from the 58.8 per cent of the previous municipal elections, roughly half of the votes remain technically in play.

“The final moments are at hand for parties to affect swing voters. People who usually make their decision fairly close to election day will be the ones showing up at polling stations on Sunday,” noted Kestilä-Kekkonen.

Taloustutkimus surveyed 2,965 people for the poll between 5 May and 8 June. The poll has a margin of error of +/-1.9 percentage points.