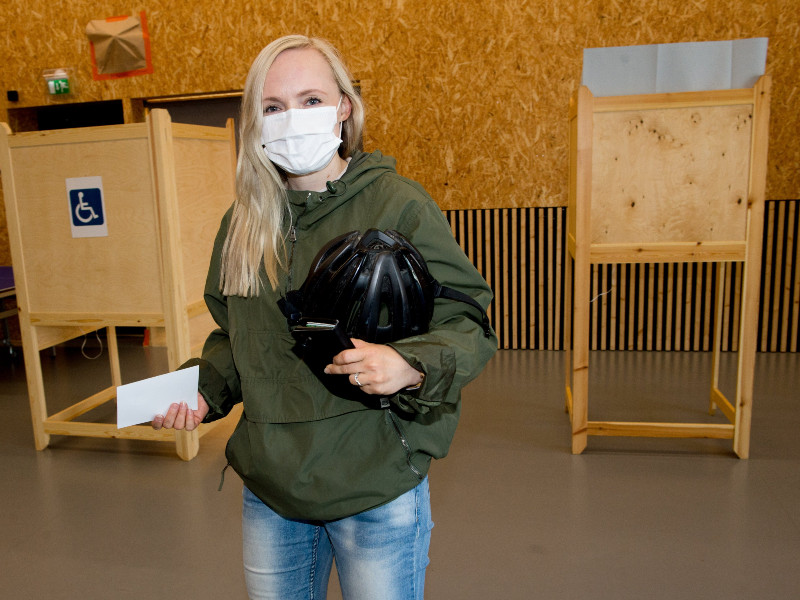 Maria Ohisalo, the chairperson of the Green League, cast her vote in advance in Viikki, Helsinki, on 3 June 2021. (Mikko Stig – Lehtikuva)

AN OPINION POLL by Helsingin Sanomat has the National Coalition leading the rest of the pack by some margin in Helsinki.

The party, which positions itself on the right primarily on economic issues, was the choice of 23.2 per cent of local residents surveyed for the poll, giving it an almost two percentage-point cushion over second-placed Green League (21.3%).

While the pecking order between the two dominant parties in the capital city has remained unchanged, the difference between them has more than halved from a little over four points since the municipal elections four years ago.

The Finns Party, the poll shows, has made the biggest gains in the last four years, almost doubling its popularity from 6.7 to 13.1 per cent. It is thereby sandwiched between two left-wing parties: the Social Democrats (13.9%) and Left Alliance (11.5%).

The poll was carried out between 17 and 27 May by Kantar TNS. The respondents were asked to name the political party or group represented by the candidate they would vote for if the elections were held today.

Almost three-quarters (73%) of respondents said they will definitely exercise their right to vote in the elections. One fifth, in turn, stated either that they are unable or unwilling to disclose their party of preference or that they intend to abstain from voting.

In Helsinki, 61.8 per cent of people entitled to vote cast a vote in the 2017 municipal elections.

Sakari Nurmela, the research director at Kantar TNS, told Helsingin Sanomat that the final voter turnout will be significant for the election results.

“It has been noticed in conjunction with parliamentary elections that the Finns Party’s supporters may decide whether to go out to vote at the last minute. It has traditionally been thought that the National Coalition does a good job at getting its supporters to polling stations. The final voter turnout is really important and causes a lot of uncertainty in the poll percentages,” he said.

In the Finnish capital, he added, the result could also depend on the mobilisation efforts of the Greens and Social Democrats.

The advance voting period for the municipal elections will end on 8 June. The election day is on 13 June.