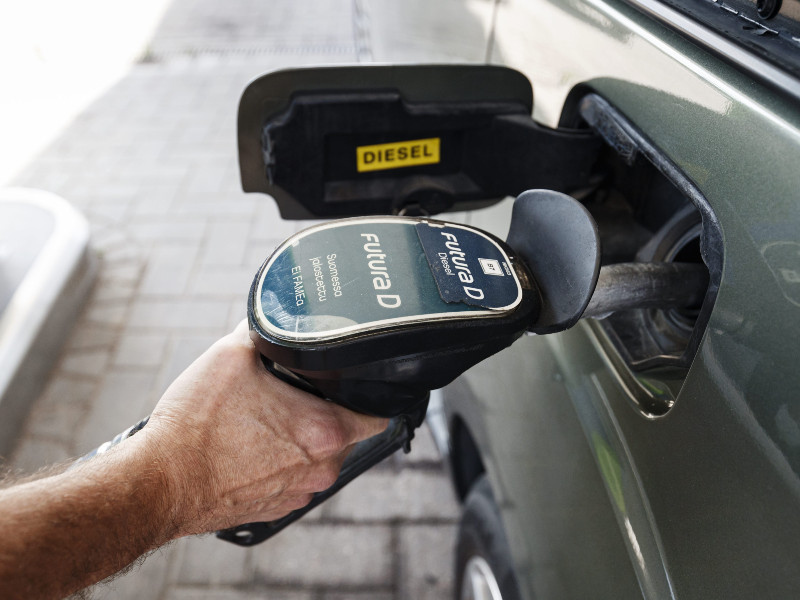 Raising the fuel tax is the most effective way to reduce transport emissions, views a task force set up by the Ministry of Finance. (Roni Rekomaa – Lehtikuva)

RAISING THE FUEL TAX is by far the most effective steering method to reduce emissions from road transport, views a task force established under the Ministry of Finance.

The task force pointed out yesterday that the car tax paid in conjunction with the purchase or first registration of a vehicle and the annual vehicle tax are not as impactful as incentives for motorists to reduce emissions because their amount does not depend on mileage.

The taxation of road vehicles should therefore be shifted away from the car tax toward the fuel tax, according to the task force.

The fuel tax, it believes, should be raised by about 10 cents for petrol and 11 cents for diesel, whereas the base tax of the vehicle tax should be lowered by adjusting the tax determined by the carbon dioxide emissions of the vehicle. The adjustments should offset each other, making the overall impact of the reform neutral.

The proposal would thus have a minimal impact on the overall tax burden of households, depending on their car use and fuel consumption.

“Emissions would decrease because the fuel tax has a bigger impact than the vehicle tax on consumer decisions about fuel consumption, and the behavioural effects would be targeted at motorists with the greatest emissions reduction potential,” the task force elaborated in its final report.

The vehicle tax consists of a base tax that is calculated based on manufacturer-reported carbon dioxide emissions on a vehicle-per-vehicle basis and a tax on driving power that is imposed on vehicles not powered by fuel or motor petrol. Levied on passenger cars, vans and lorries, the tax generates annual revenues of roughly 1.15 billion euros.

Revenues from the car tax, meanwhile, stand at about 900 million euros.

The fuel tax is a politically sensitive issue, especially on the eve of the municipal elections. Minister of Finance Matti Vanhanen (Centre) declared in a press conference yesterday that the increase in fuel tax will not be carried out by the current government.

He also expressed his shock at the outlook for tax revenues from transport.

The revenues have begun to decrease as a result of the electrification of transport, with the task force estimating that at current tax rates they would be about 1.7 billion euros lower than currently in 2030. This is an enormous dent on public finances that will have to addressed by future governments, said Vanhanen.

The income tax, he highlighted, generates annual revenues in the region of six billion euros.

The task force also proposed that the car tax not be levied on fully electric vehicles. The car tax cut, it envisioned, could be implemented by lowering the rate gradually starting with vehicles emitting at most 80 grams of carbon dioxide per kilometre.

Its impact on the stock of fully electric vehicles was estimated at 2,300 vehicles by 2030.

The Ministry of Transport and Communications is not fully satisfied with the conclusions of the task force. It declared in a supplementary statement that the proposal is “fairly tame” in light of the expectations and possibilities concerning the development of transport taxation.

The tax reform, it said, should also create incentives for other low-emission vehicles, such as plug-in hybrids and gas vehicles, given that the share of fully electric vehicles of new registrations is expected to remain relatively low.

The reform is closely linked to a government effort to halve greenhouse gas emissions from domestic transport by 2030 and eliminate them altogether by 2045.